■ MANY THANKS FOR THE PAST 10 YEARS

On June 23, 2021, LINE celebrates its 10th anniversary. We are grateful to announce LINE’s 10th anniversary and wish to thank to our users, partners and everyone who supported LINE for 10 years!

To commemorate LINE’s 10th anniversary and express our appreciation to all of you, LINE is taking a special look back on the past 10 years.

For LINE, the last decade is just the beginning. The 10th anniversary concept slogan ‘To The  Next’ expresses the idea that LINE will continue to hear the voices of users and continue to create better services for the next 10 years. And to express our gratitude to all employees who have worked so hard to provide the highest quality services to users over the past 10 years, we delivered a 10th anniversary trophy and gifts to all global employees on June 23.

Let’s take a look back on the history of LINE’s last 10 years through photographs and illustrations. 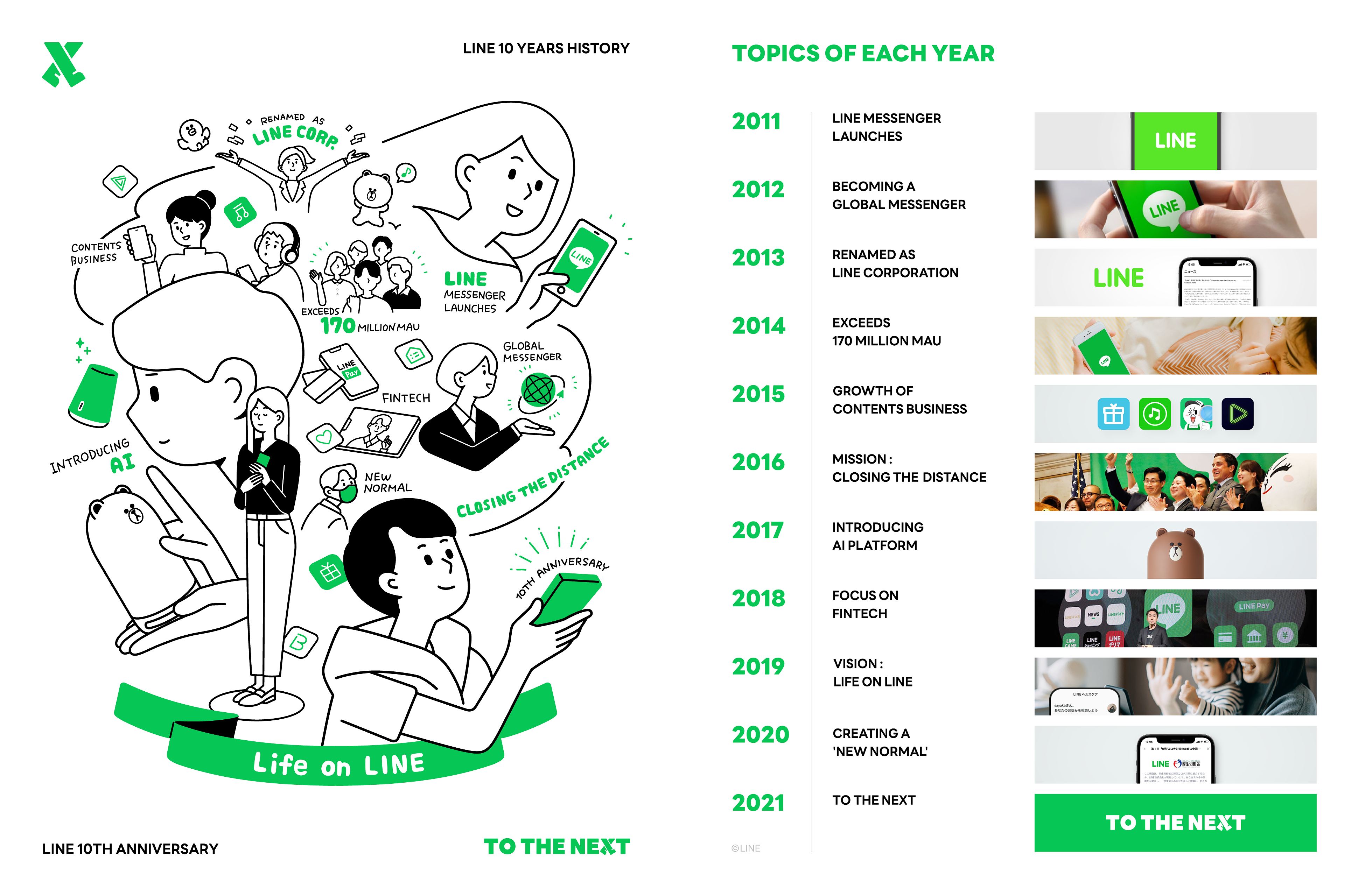 Based on the experience of people being unable to get in touch with loved ones during the Tohoku Earthquake, LINE was built so that they could easily contact each other in emergencies. The LINE app was launched in June 2011 as a communication app that lets people connect with their loved ones via smartphone. Initially, it was released as a simple app that was only able to send text messages. After improving its features and adding free calls/stickers, the app became popular, especially among high school girls, and achieved 10 million downloads in the first six months after its release.

The Home and Timeline tabs were announced next, strengthening the social networking aspect of the LINE app. From a simple communication tool, LINE began its journey to becoming a smartphone-based "life platform." People around the world began to discover the LINE app, as the number of users grew to over 55 million worldwide and 25 million in Japan. LINE found popularity in Taiwan and Hong Kong in East Asia; Thailand and Singapore in Southeast Asia; Saudi Arabia and Qatar in the Middle East; as well as Switzerland, Turkey, and Russia. As a result, the app was ranked first overall in the App Store's free apps category across 24 markets.

In addition to video calls, LINE announced several new services and features, including games, music, and e-commerce. In November, the number of registered users of the LINE app exceeded 300 million worldwide. LINE succeeded in rapidly acquiring users as it focused its efforts on promotions that were suited to each market and strengthened collaborations with local partners. To expand its business, the company name was changed to LINE Corporation.

At LINE CONFERENCE, we announced new services such as LINE Pay and LINE@, as well as strategic partnerships for the entertainment sector under the theme of "Life," with the goal of making LINE more integral to daily life. During 2014, we also reached 170 million monthly active users (MAU) across the world.

We strengthened our business infrastructure presence as more clients used LINE as a marketing platform: leveraging LINE Official Account, sponsored stickers, and other services to connect with consumers. This was also the year we launched some of our most popular services to this day, such as LINE GIFT, LINE LIVE, LINE Creators' stickers, and LINE MUSIC.

Five years after the launch of the LINE app, we were listed simultaneously on the New York Stock Exchange and the First Section of the Tokyo Stock Exchange. That year, we also unveiled our corporate mission of "Closing the Distance." Through services like LINE Pay Card and LINE Mobile and the strategic opening up of our business platform, we then started moving toward becoming a smart portal that made LINE the gateway for connecting people with others, information, and services. Our Asia-focused global expansion also progressed. In Thailand, we launched the LINE MAN on-demand service.

In March, we revealed our cloud-based AI platform Clova. Then in October, we released the Clova WAVE smart speakers, followed by the Clova Friends smart speakers in December, entering the Japan market before global tech giants. At LINE CONFERENCE 2017, we announced our three visions: "Everything Connected," "Everything Videolized," and "Everything AI." All told, AI was positioned as our biggest goal over the next five years.

This year we showcased diverse initiatives across AI, e-commerce, and more, but the focus was really on expanding our fintech business with cashless payments, investing, insurance, and a token economy. In November, we announced our entry into the banking business. Setting our sights on business expansion in our four key markets (including Japan), we formed partnerships with a diverse range of domestic and international companies. In short, this was the year we saw all our preparations for our fintech business really take off.

At June's LINE CONFERENCE, we declared our new vision of "Life on LINE." This signified a future in which we envisioned LINE as the "life infrastructure" in people’s lives, providing 24/7/365 support for our users. In November, we turned our gaze toward competing with the global tech giants through announcing our business integration with Yahoo. In Taiwan, we launched the Fact Checker service to help users identify fake news and combat the spread of misinformation.

With the rise of COVID-19 pandemic forcing changes all over the world, LINE launched a variety of services like LINE Doctor, designed to tackle the new normal. We also did our part as a social infrastructure company with many initiatives. This included conducting five nationwide user surveys to help form COVID-19 measures, and partnering with the Ministry of Health, Labour and Welfare and SoftBank to supply 2,000 iPhones pre-installed with LINE to passengers of the Diamond Princess when it was anchored in Yokohama Bay.

LINE has changed the way people think about communications, and made finance, healthcare, and many other aspects of society more convenient. But we are still not satisfied. To us, the past 10 years have just been the beginning. LINE will continue moving forward to help society and blur the line even further between online and offline. LINE's next challenge to be a life platform for our users has already begun.

For the next 10 years, LINE will do its best to enrich the lives of our users. We look forward to your continued support for LINE.

NOTE: This article was updated on December 22, 2021 to reflect a change in the virtual background download status.