● Shonen Jump all-stars battle it out in action-packed game 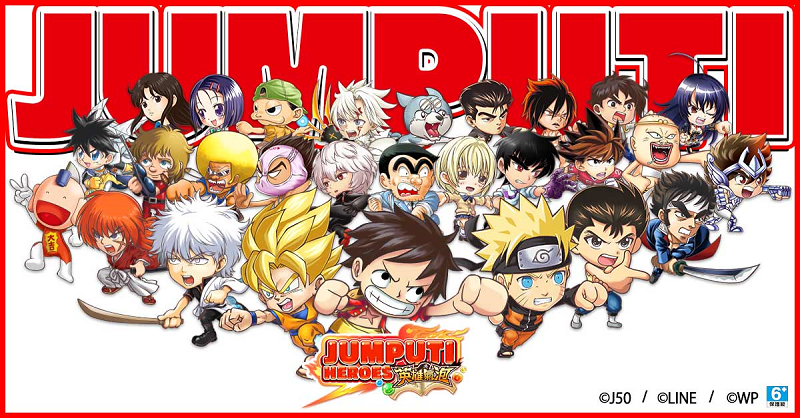 Jumputi Heroes is a bubble-popping RPG centered on friendship, hard work, and victory, and celebrates the 50th anniversary of the Weekly Shonen Jump ("Shonen Jump") magazine—long home to hit manga series such as One Piece, Dragon Ball, Bleach, and Naruto. First launched in Japan in March 2018, the game's all-star cast of Shonen Jump characters and its single and co-op modes have proven a hit with players, propelling downloads past five million in Japan and counting since June 2019.

Since pre-registration for the Asian release commenced on June 4, 2019, over 100,000 people have signed up. Amid this great amount of anticipation, Jumputi Heroes finally launches today in Taiwan, Hong Kong, Macau, Singapore, and Malaysia.

Rewards for all users who pre-registered

All users who pre-registered for Jumputi Heroes will receive one commemorative Gacha ticket when they log into the game. Additionally, to celebrate the overall number of pre-registrations, all users who pre-registered will get a further 100 Rubies, one Gacha ticket each for Dragon Ball, One Piece, and Bleach, one Chopper (five-star rarity), and one commemorative Gacha ticket which guarantees a four-star item or rarer. Make sure to log into the game as soon as possible and claim these amazing prizes.

Rewards from each of the different campaigns held during the pre-registration period will be sent to users on a staggered schedule from June 25.

Note: Each account can only receive each type of prize once.

Users who participated in the pre-registration events should ensure they download the game within 30 days from June 25, complete the tutorial, and link their LINE account. Prizes will be sent to player's in-game gift boxes.

Special events to celebrate the release of Jumputi Heroes in Asia

Numerous special events will be held to celebrate the launch of Jumputi Heroes, including a login bonus event, limited-time missions, and the chance to roll the Gacha ten times for free. Take part in the different events, gather up characters and items, and hit the ground running for the battle to save Jumputi Island.

Additionally, the Duel mode will officially open on June 25 for all those competitive players looking to prove their mettle.

Users who log into Jumputi Heroes every day during the login bonus event will receive items such as a character Gacha ticket, and tickets that can be used to get power-ups such as books for leveling up, or Jump Souls for upgrading characters. Obtaining these items is as simple as logging in, so do not miss out!

Fourth day: 1 ticket for a 3-star character or rarer

Seventh day: 1 ticket for a 4-star s or rarer

Note: Rewards can be claimed only once a day.

A total of seven missions will be available for a limited time only. Clearing each one will reward players with a prize, while clearing all seven missions will give out a mammoth 600 Rubies. Take up the challenge and claim this grand treasure. More details on each of the missions can be found within the game.

To further celebrate the game's release in Asia, a special commemorative Gacha will allow players to roll the rare Gacha ten times for free. Players will be able to roll once a day, so remember to log in!

For a limited time only, Monkey D. Luffy Gear Fourth will appear in a special Gacha as an exclusive commemorative character, and will come equipped with all the trademark techniques such as Gomu Gomu no King Kong Gun. Do not miss the chance to get this super-powered version of Luffy!

Commemorative pack to go on sale

Jumputi Heroes is a bubble-popping RPG centered on friendship, hard work, and victory, and celebrates the 50th anniversary of the Weekly Shonen Jump ("Shonen Jump") magazine—long home to hit manga series such as One Piece, Dragon Ball, Bleach, and Naruto. Bringing together a slew of famous Shonen Jump characters, and boasting sprite animations and in-battle performances that bring famous scenes from the comics to life, players will be on the edge of their seats as they take part in these extravagant battles.

In the world of Jumputi Heroes, the Shonen Jump characters live together peacefully on Jumputi Island.

However, every 50 years an evil power awakens...

The monster king's darkness seeps into the minds of the island's heroes, making them go berserk!

To return themselves back to normal, the heroes must overcome the darkness within themselves and travel across a myriad of islands to find the monster king and vanquish him for good.

Call for a supporter during battle and activate the friendship skill for a wide range of support abilities. Use the power of friendship between characters to win battles and progress. In addition to partnering with in-game characters, players can also team up with other players.

Dive into the game, match up the puzzle pieces and unleash the characters' powerful and dazzling ultimate abilities. Collecting puzzle pieces will also fill up the Legend Gauge. Filling it all the way up will reward a player's hard work with the ability to summon a Legend: one of Shonen Jump's fabled heroes. The attacks from these Legends are so powerful that they can turn the tables when things are looking bleak. Make sure to keep an eye out for battle sequences that re-enact iconic scenes from the comics. Gather those puzzle pieces and let loose a formidable attack!

In this RPG, players can team up with in-game characters or with other players (embodying "friendship"), strive to collect as many puzzle pieces as they can ("hard work"), and use that power to defeat powerful bosses ("victory")—all within the one-of-a-kind universe of Shonen Jump. 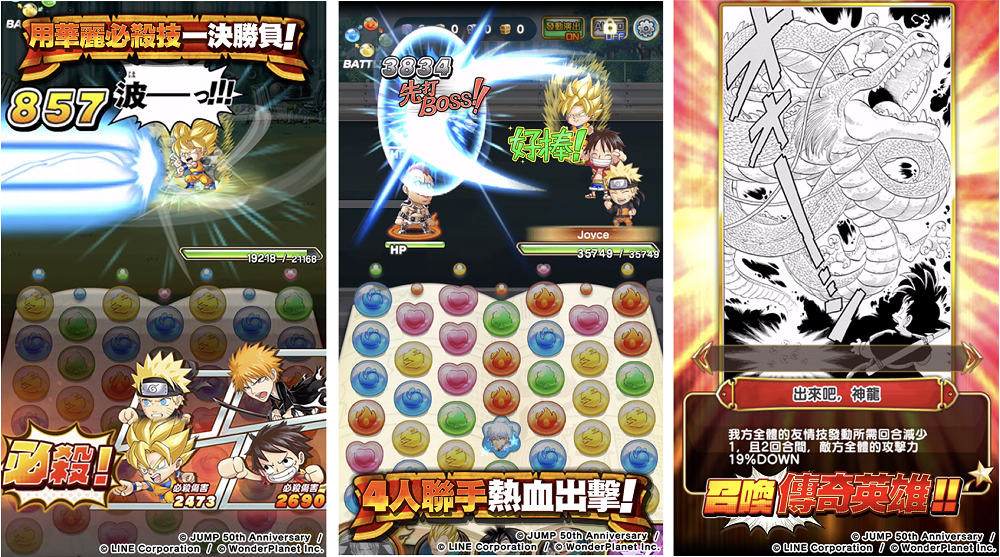