In LINE: Disney Toy Company, players help out the Toy Company’s employees, "Toys." Players have around one minute to slide their finger up, down, left, and right to collect as many Blocks as possible to aim for a high score.

Beloved Disney characters such as Mickey Mouse, Minnie Mouse, Winnie the Pooh, and Stitch appear as never before seen Toys designed especially for the game.52 Toys representing various Disney characters are available at launch. In addition to a tantalizing gaming experience, the game offers a variety of entertaining features. For example, each Toy produces special skills true to the Disney stories, and its Toy House can be “Stepped Up” and enhanced.

Furthermore, by linking their game ID and LINE ID, players can compete in the user rankings with their LINE friends, send and receive Hearts that function as tickets for playing the game, and enjoy a better gaming experience in other ways.

The game is available for download in Taiwan, Thailand, Macau, and Hong Kong starting today. 300,000 players have registered for the game since pre-registration opened up on March 4, 2019. As a reward, all players who log in to LINE: Disney Toy Company during the promotional campaign will receive a variety of items including the “Minnie” Toy, Coins, and a Premium Gacha Ticket.

To commemorate the game launch, a special LINE: Disney Toy Company sticker set of 8 stickers will be distributed. Download the stickers illustrating Toys enjoying work and giving greetings. See the in-game notice for more details throughout the mission. 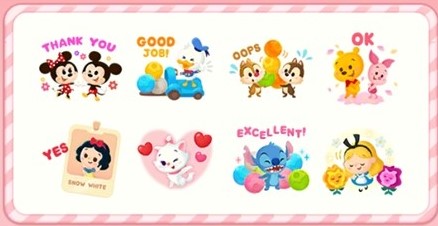 1. How to play the game and achieve a high score

Players have around 1 minute to slide their finger up, down, left, and right to collect as many Blocks of the same color as the Toy Machine as possible for a high score. New players start the game as a newbie at the Toy Company, and are introduced to Chip and Dale. Players choose either character and undergo new employee training (which is essentially the game tutorial) with their selected Toy to learn the rules and game operation.

Match Blocks and aim for the high score!

The key to achieving a high score is to fill up the Skill gauge and increase the Combo count by matching as many Blocks of the same color as the Toy Machine as possible.

Blocks level up when matched with other Blocks of the same color. The number displayed at the bottom right of a Block shows the current Block level. Match more than 5 Blocks,, and the Block becomes a Rainbow Block. Rainbow Blocks are a type of Block that lets players gain a high score. Players are encouraged to level up Blocks as much as possible before matching them with the Toy Machine to get an even higher score.

The Toy Machine changes color after a certain period. This changes the color of the Blocks for players to collect. Each Toy working appears at the top of the screen, moving Blocks towards the right. Once a Toy finishes its turn, the next Toy appears on a Toy Machine of a different color, and the process is repeated. Players must collect Blocks that match the color of the Toy Machine at every given moment. While collecting Blocks, players are also encouraged to feast their eyes on the adorable Toys working away.

Use Bubble Blocks to match many Blocks at once

Matching Blocks of the same color as the Toy Machine consecutively within a specific time earns players a Combo. Once the Combo count reaches a certain level, a  Bubble Block appears. A Bubble Block can change surrounding Blocks into the same color as the Toy Machine, some has special effects including extending the time limit of a game round, and so on.. For this reason, Bubble Blocks should be used strategically for a higher score.

To master the game, players are encouraged to use their intuition, constantly keep their fingers moving, and pull Blocks every which way until they learn the ropes. Practice makes perfect.

2. 52 Toys available at launch! Activate a skill of a “MyToy”

52 Toys featuring Disney characters, including “Mickey”, “Alice”, “Pooh”, “Snow White”, and “Stitch”, are offered in the launch version of the game. Toys are obtainable from the Premium Gacha and Company Missions that players can take on after they reach Level 3. More Toys are planned to be added to the game over time. Players get one try at the Premium Gacha with 30,000 Coins received as a reward or by converting Rubies.

Level up Toys and see them in action

Players can set a Toy from their collection as their "MyToy," and activate its skill based on the number and colors of Blocks they collect during the game. Each Toy's unique skill displays must-see effects that evoke the character's distinctive stories.

The more players play the game, the more their Toys level up and produce powerful skills. In addition, Toys earn a higher experience score (EXP) when players clear a stage with a high score.

3. Collect Toy Stones and Step Up the Toy House

Each Toy lives in its own Toy House that enlarges and expands with Toy Stones obtained in the game. The necessary type of Toy Stone and the number of steps required to achieve the final Toy House differ depending on the Toy as each house changes its appearance with every step. Players not only get to enjoy an extravagant Toy House when it reaches the final level, but they also start to earn bonus points in addition to EXP from that point on. Therefore, players are encouraged to make an effort to expand their Toy Houses, not to mention enjoy watching their Toys have fun on their Houses.

Android and Google Play are registered trademarks of Google LLC.