- Fully leveraging the strengths of the three companies with the largest scale user bases in Japan, will maximize life time value (LTV) and enable continuous and effective sales promotion

- "Buy more and save more" – Enhanced shopping experience to be provided in stores and on e-commerce (Yahoo! JAPAN Shopping) for a variety of popular items, including beverages and daily products

LINE/Yahoo! JAPAN/PayPay Mileage will be launched as a separate initiative to the ID/Data Linkage (tentative name) planned by the ZHD Group. However, linkage between the two initiatives will be explored in future to bring even more convenient and value-added services to users. In implementing the linkage, ZHD will comply with the Act on the Protection of Personal Information of JAPAN (e.g., appropriately obtaining the consent of individuals where necessary), and will process data in a secure environment placing the highest priority on protecting privacy. 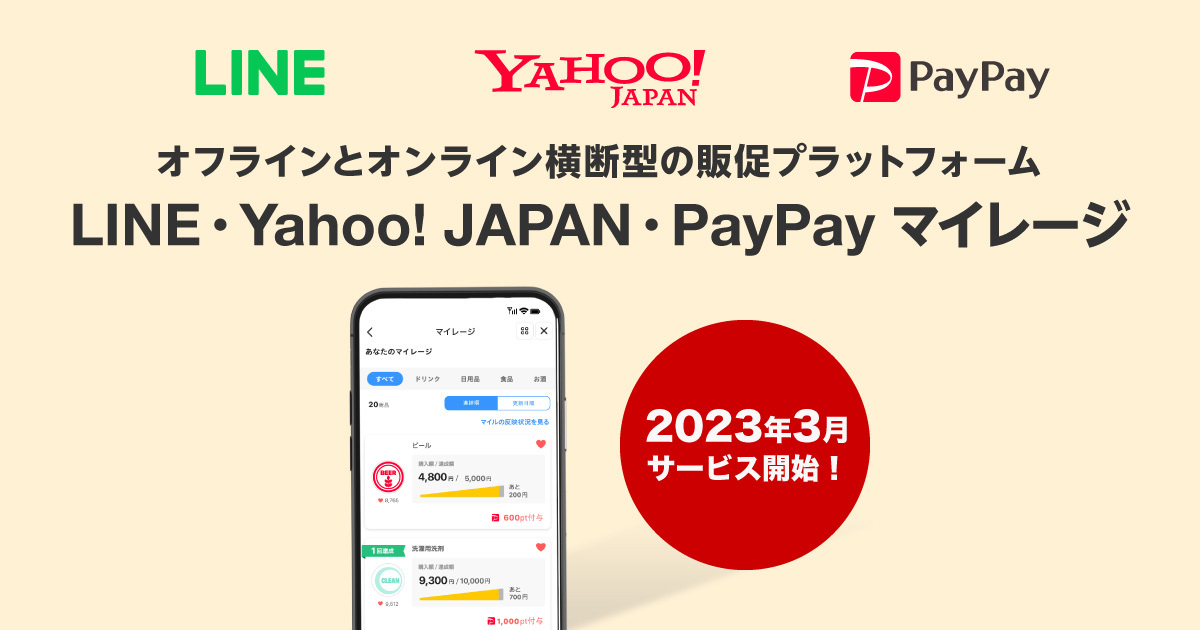 Although the scale of the sales promotion market in Japan is larger than that of advertising, it is said to be dependent on analog approaches such as direct mail and flyers. As a result, companies are unable to obtain data on purchasing behaviors of users, and the difficulty in measuring effectiveness poses a challenge to continuous and optimal sales promotion activities.

In response, LINE, Yahoo Japan, and PayPay have decided to join forces to take on the challenge of driving the digital transformation of sales promotion activities in Japan through LINE/Yahoo! JAPAN/PayPay Mileage, a mileage-based sales promotion platform. The three companies will leverage their expertise gained from their user bases and services: LINE, with approximately 93 million monthly users*3 providing a communication app; Yahoo Japan, with approximately 55 million monthly users*4 providing around 100 services including e-commerce; and PayPay with approximately 53 million registered users*5 providing payment and point-reward services.

When users purchase an eligible product from a manufacturer participating in the LINE/Yahoo! JAPAN/PayPay Mileage program, they can earn miles in proportion to the purchase price of each product. Both offline purchases by PayPay payment at eligible stores, and online purchases at eligible stores on Yahoo! JAPAN Shopping are entitled to the miles. Users will be able to check their purchase information of products via the LINE/Yahoo! JAPAN/PayPay Mileage service screen, and convert their accumulated miles into rewards such as PayPay Points. This allows users to enjoy savings any time for all purchases made both offline and online.

Through this system, manufacturers and other companies participating in the LINE/Yahoo! JAPAN/PayPay Mileage platform can promote and expect continuous purchases by users. In addition, the system enables companies to capture users' online and offline purchasing and behavior trends, and to use the purchase data for continuous and effective sales promotion. Compared to conventional spot sales drives, companies participating in the program can reduce sales promotion costs, maximize LTV, and expect an increase in the number of loyal customers*6.

Furthermore, in the future, LINE/Yahoo! JAPAN/PayPay Mileage is scheduled to be linked to LINE Official Accounts of participating companies to enable direct sales promotion by the companies to users. As users will receive information via LINE Official Accounts based on their own purchase history, they will be able to enjoy more convenient shopping experiences with more benefits.

LINE, Yahoo Japan, and PayPay, with their largest scale user bases in Japan and provision of services that are used in all aspects of daily life, will continue to draw on the synergies generated by the ZHD Group and the power of information technology to the fullest, to promote digital transformation in sales promotion activities in Japan, and support companies realize continuous and effective sales promotion activities. The Group will also provide users throughout Japan with unparalleled shopping experiences that are highly satisfying, and promote more convenience in society. 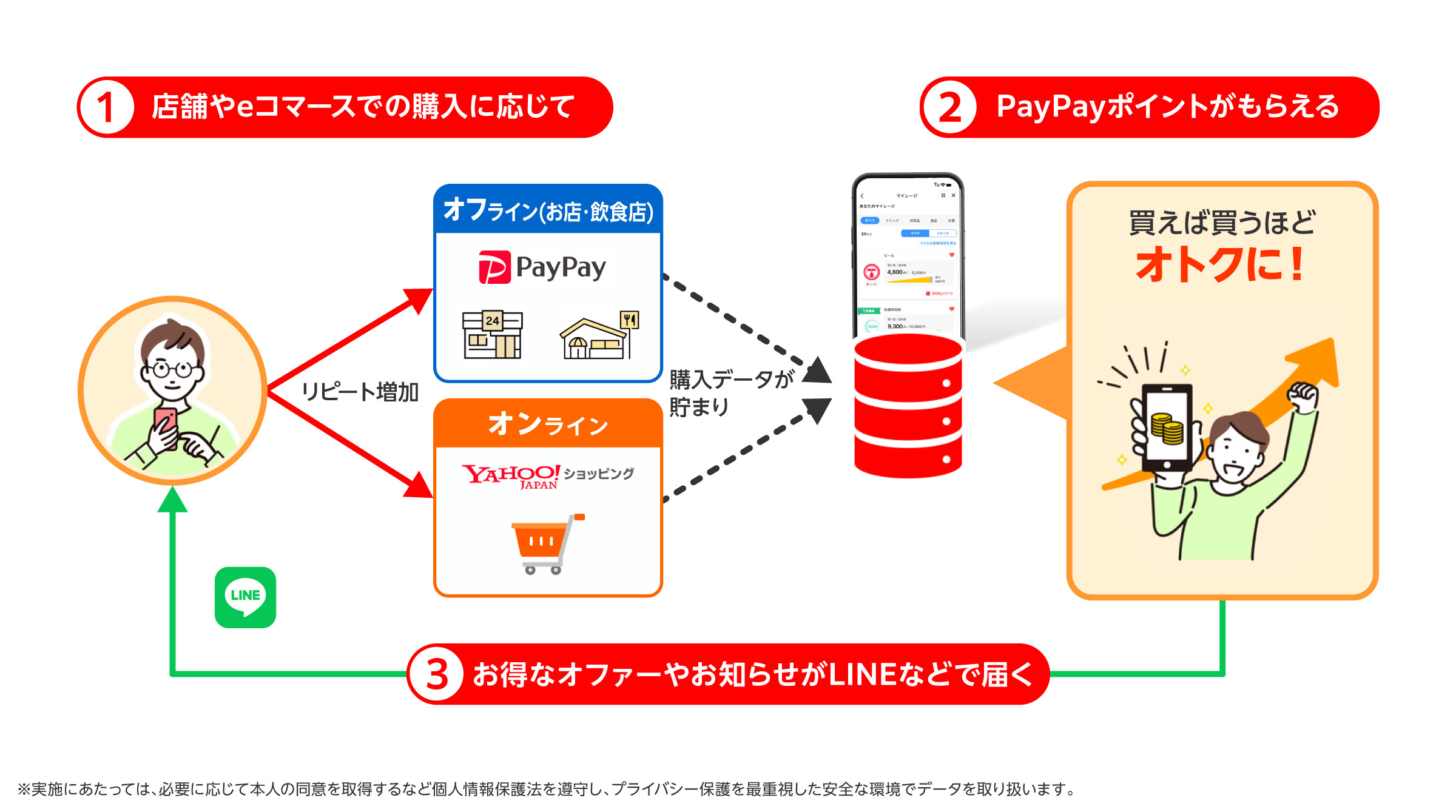 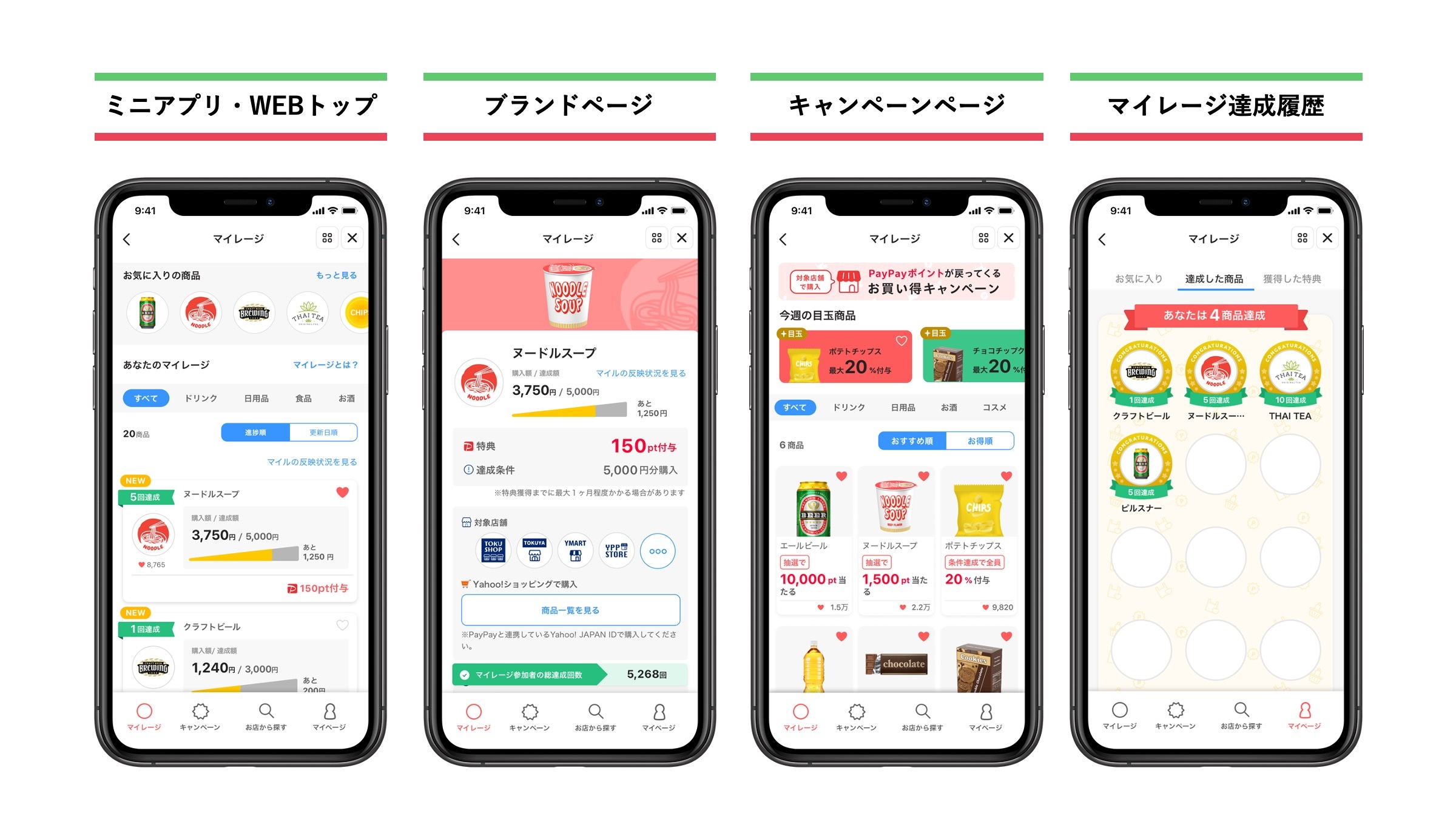 *1Only participating stores that accept PayPay payments are eligible.

*2For the time being, only for Yahoo! JAPAN Shopping. All payment methods are eligible.

*4Number of monthly logged-in user IDs. As of September 2022.

*6Users who have an attachment to a company, brand, or its product, etc. and who are continuous users and buyers.