TOKYO – June 3, 2019 – Pre-registration opens today for LINE HELLO BT21, the newest puzzle game to come to the LINE Games platform operated by LINE Corporation ("LINE"). The game will star the eight characters from BT21, a new IP created with the collaboration of LINE FRIENDS and BTS.

LINE HELLO BT21 becomes the latest game to join the hit LINE Bubble series, which has amassed over 40 million downloads worldwide to date. Players progress through the game by matching up three or more bubbles of the same character to burst them. Clearing stages will also reward players with Stars that can be exchanged for items to deck out their town, while correctly answering BT21's pop quizzes will unveil collectible original photos. Keep an eye out as BT21 also pop up in never-before-seen costumes and reveal all-new charms in this latest adventure.

The story so far

Hailing from outer space, Tata has come to earth with Van the robot to spread love.
But somewhere along the way, he accidentally loses his transformation laser gun in the grass.
It goes off and zaps the nearby dandelions, turning them into gigantic shrubs that quickly overtake the city.
Together with the other BT21 members, Tata sets out to return things back to how they were...

Will the Universtars be able to save the world from its fluffy fate? 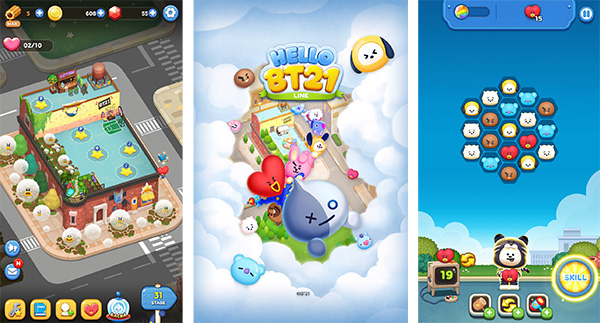 Screenshot is for reference only.

Pre-registration presents include Coins, booster items, and Gacha Tickets depending on players' country/region of residence and the number of people who pre-register. Presents become more impressive as more people register, so everyone is encouraged to sign up. The items will be given to all players who log into the game after its official release. Do not miss this opportunity and pre-register today!

Note: Items must be claimed within two weeks of the game's official release date.
Items will be given out on a staggered schedule, meaning different users will receive items at different times.

Players who share the game’s official account can receive handy in-game items, such as Churros and Rockets, depending on how many people they have shared with.

Android and Google Play are trademarks or registered trademarks of Google LLC.
iPhone, iTunes, and App Store are trademarks of Apple Inc., registered in the United States and other countries.
All other trademarks are the property of their respective owners.
All information is true and accurate at the time of publication, and subject to change without notice.