TOKYO – April 17, 2019 – LINE Pay Corporation ("LINE Pay Corp"), operator of the LINE Pay mobile money transfer and payment service available on the LINE messaging app, announces the release today of LINE Pay App: a dedicated app for making payments with LINE Pay. The app will be available for Android from today, with the iOS version to come soon.

Since December 2014, the LINE Pay service has been available within the LINE messaging app, which itself is used by 79 million monthly active users (MAU)* (85% of which use the app daily) in Japan. Boasting a simple signup process that only requires users to access the Wallet tab and agree to the terms and conditions of use, the LINE Pay service and its 32 million strong domestic user base has now become one of Japan’s largest payment channels.**

In 2018, called the "dawn of the cashless era", the domestic cashless market was greatly invigorated. For LINE Pay too, last year saw it record a transaction volume of over one trillion yen from users worldwide. In 2019, LINE Pay Corp is looking to further spur cashless payments as it aims to reach a target of 10 million global MAU. As part of these efforts, the company launched the monthly Pay-Toku campaign last year, rewarding all participating users with 20% back on their purchases for the December campaign. As a result, the number of LINE Pay monthly users in March 2019 had doubled from that of the pre-campaign number of users.

Against this backdrop of increasing LINE Pay users and accepting locations, LINE Pay is now offering LINE Pay App to make payments even more convenient. This marks the first time LINE Pay Corp will release an app for users.

The app takes the LINE Pay feature from the LINE messaging app and offers it in a separate app, making it easier to access and make payments with. However, users also have the option to continue using the service from within the LINE messaging app if they wish. Additionally, LINE Pay App will come with a highly requested in-app map feature that allows users to search for nearby locations accepting LINE Pay.

The feature displays a code (no password required*) for making purchases of less than JPY 300,000 (including tax), enabling hassle-free payment over the counter. Both merchant-presented mode (MPM) and consumer-presented mode (CPM) will be supported on the one screen. The feature will also have some of the unique "LINE" touch, including a sound which signifies a payment has gone through, and the appearance of LINE characters.

*Users can also set a password and turn on the option to enter it every time they open the app.

Users who turn on location sharing will be able to search an in-app map for nearby locations which accept LINE Pay, or use the search bar to find accepting stores in the area they are planning to visit. In the near future, users will also be able to see at a glance when campaigns are running.

Up until now, a list of LINE Pay-accepting stores has been provided on the LINE Pay website. This list will also be made available in LINE Pay App, with users able to see with just a tap which stores are offering coupons, and campaign discounts and rewards.

All available coupons will be displayed on the LINE Pay Coupon screen, making it easier for users to choose which ones they want, and easier to access when paying. Users can take advantage of great deals by simply selecting a coupon, and swiping to bring up the payment screen.

To celebrate the release of LINE Pay App today, LINE Pay will offer users 100 yen coupons for Family Mart, Lawson, and Poplar, a 200 yen coupon for Matsuya, and a 5% off coupon for Rakuma. Users can tap to download the coupons they want, and find all downloaded coupons under My Coupons. 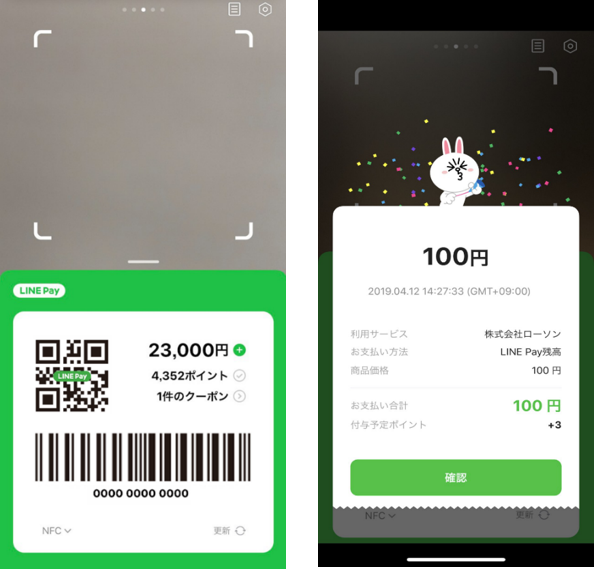 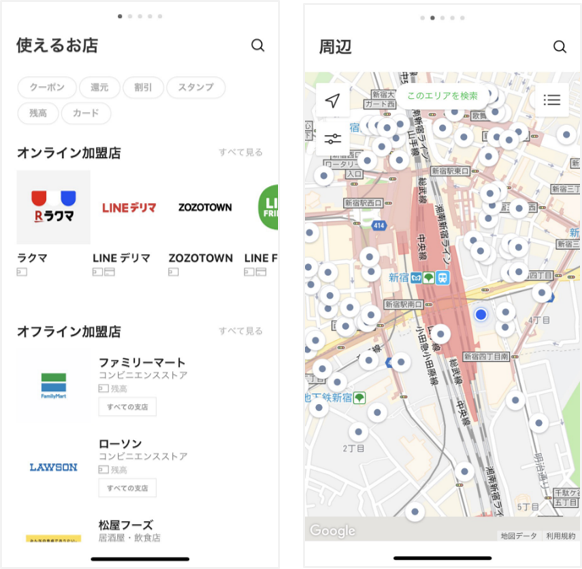 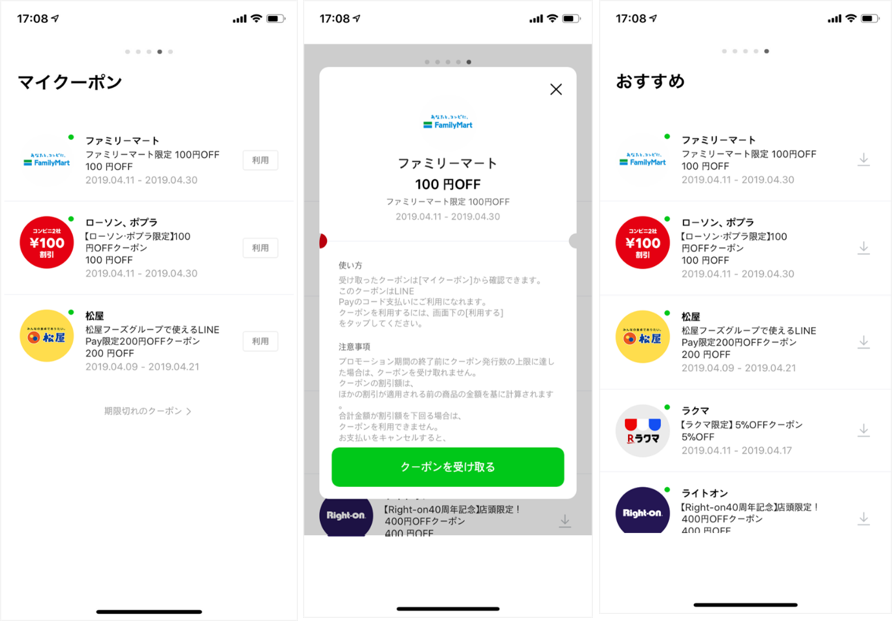 *Screenshot is for reference only

Also, to mark the app's release, users who use LINE Pay App to make a QR/barcode payment during the Final Heisei Pay-Toku Fest campaign (starting April 18, 2019) at participating stores can receive up to JPY 10,000 back—double that of the campaign's standard JPY 5,000. This makes LINE Pay App the most rewarding out of all available payment methods, so everyone is encouraged to take advantage of the campaign while it lasts.

Campaign details: Reimburses up to 20% of a user's LINE Pay purchase amount, paid into their LINE Pay balance at a later date.

Reimbursement amount: 15% back (up to JPY 5,000) under the Pay-Toku portion of the campaign

Download LINE Pay App, and use it when making a QR/barcode payment to receive double the reward. Users can get up to 15% back (up to JPY 10,000) from the Pay-Toku portion of the campaign.

The Final Heisei Pay-Toku Fest campaign offers 15% back on the total amount of purchases made during the campaign period with the above payment methods. On top of this, points from the My Level incentive program for LINE Pay users (http://pay-blog.line.me/archives/10928823.html (Japanese)), and an additional 3% cashback campaign for QR/barcode payments (running until July 31, 2019) are included, adding up to a reward rate of up to 20%. The reimbursement will be added to the user's LINE Pay balance around June 30, 2019.

LINE Pay closes the distance between people, money, and services by eliminating existing pain-points – time, effort, fees, and more – of circulating money. The company also aims to become a leader in the mobile FinTech industry as the world moves increasingly towards a cashless and walletless society.

- Sales and operation of LINE@

LINE Pay Corporation is a registered member of the following organization and has obtained the following registrations in association with the launch of its business: