TOKYO - March 15, 2018 - "LINE LIVE," the live video streaming platform operated by LINE Corporation, has been launched in Taiwan in the form of a "LINE LIVE player" which allows viewers to send comments and hearts to livestreamers. 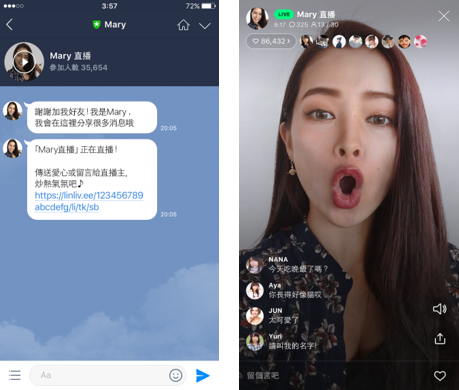 The LINE messaging app has been expanding globally since its service launched on June 23, 2011. With more than 168 million combined monthly active users (MAU) in Japan, Thailand, Taiwan, and Indonesia *1 which are its four major markets, LINE continues to evolve into a "smartportal" that seamlessly connects people, information, services, businesses, and brands in a way that is adapted to local cultures and demands.

Meanwhile, LINE LIVE began in December 2015 as a livestreaming service that enables streamers and broadcasters to enjoy real-time communication from anywhere, anytime. Popular livestreams are not only by general users but also celebrities and artists who stream from their official channels. From talking about their day or confessing their feelings as in writing in a journal to playing a musical instrument or singing for their viewers, all streamers enjoy livestreaming in their own way. With more than 33 million MAUs currently in Japan, LINE LIVE is being used by a wide range of users regardless of age and gender.

Livestreaming is expanding not only in Japan but overseas as well. In September 2017, LINE LIVE was jointly launched in Germany with major European mass media company ProSiebenSat.1 Digital. Then in February 2018, through a partnership with MCN Kharabeesh, the LINE LIVE LAB was established in 12 countries in the MENA (Middle East and North Africa) region as the first Arab creator incubating program. *2*3

*2: Press release regarding service launch in Germany (Japanese only): https://linecorp.com/ja/pr/news/ja/2017/1857

*3: Press release regarding service launch in the 12 countries in the MENA region: https://linecorp.com/en/pr/news/en/2018/2052

And now, the LINE LIVE player which enables viewers to send comments and hearts to livestreamers in the LINE chat has been launched in Taiwan.

Usage of livestreaming technology is increasingly diversifying in Taiwan, from watching sports events and commentating on e-sports to enabling live commerce. At the "2018 LINE Taiwan Annual Press Conference" which took place on the 9th of this month, LINE announced that further developing its content, diversifying its features, and supporting more devices  are part of its development strategies for 2018 to foster a content ecosystem. Further, it aims to add more entertainment-related channels proactively including movies, music, television, sports, and games to quench the curiosities of a wide range of users.

By launching the LINE LIVE player in Taiwan where the livestreaming business is surging, celebrities and businesses with an official account can receive comments and hearts from viewers on LINE, allowing for an even deeper bilateral communication. Additionally, viewers can interact with each other using the comment feature for an even more diverse livestreaming experience.

With global expansion in mind, LINE LIVE will continue to provide content adapted to the local cultures and demands of each country, and to do so, it will upgrade its features through additions and improvements and cooperate with local partners. Through all of these efforts, LINE LIVE will aim to evolve into a “smartportal” through its video business.