● Join the Order of the Moon in their fight against Antone, the disciple of darkness!

Use strategy to attack and defend towns! Battle together with friends in real time!

LINE Little Knights is a casual strategy simulation game starring the familiar LINE characters. As the Order of the Moon, players use strategy and magic to topple Antone, the disciple of darkness, and bring peace back to the world.

1. Summon units with a tap of a finger

Summon a variety of units depending on the course of battle, including warriors, archers, and magicians. Simply tap on a location to summon units one by one, and they’ll automatically start attacking the town. Different unit combinations make various exciting fighting tactics possible. Also, by destroying the buildings in towns, players can acquire the Minerals they need to summon units.

Lastly, players can power up their units by racking up victories and collecting Moonstones, Rubies, and Cards.

2. Use magic to support attacks

Players can support their units’ attacks with magic spells that become available over time. Spell types include heal, attack, aid, and more. By using Oracles that have the power to affect all that goes on in a battle, players can wipe out their enemy in an impressive performance.

● Have team battles with friends in real time!

Players can also engage in team battles of up to 3 vs. 3 players. They can also join in their friends’ battles to help each other out to secure victory. By working together, this opens up possibilities to defeat even stronger enemies. As players win battles and advance in the leagues, their Order will become even more powerful!

The key to winning is to not only go on attacks, but also reinforce one’s own town so that it can withstand enemy assaults. Players can rearrange artillery, waterways, Brown’s house, and other various weapons and buildings to create their own unique town. They can also enjoy watching town dwellers such as Brown and Moon bustling about.

Everyone’s favorite LINE characters appear as in-game units, bravely serving in the Order of the Moon. Each unit has its own special set of skills, so players are encouraged to dispatch them strategically according to the course of battle. Also, look out for original characters unique to LINE Little Knights! 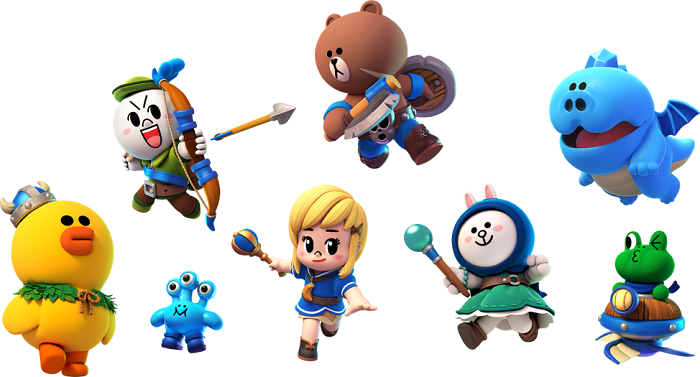 1000 years have passed since the Moon disappeared from Hegeria, and few remember the pure light that once illuminated the world nightly.

But the nights would grow darker still. One day, Antone, the disciple of darkness, turned his malevolent attention toward the Hegerian continent.

The Kingdom of the Moon, Ecliss, became embroiled in the fires of war.

Lina, princess of the besieged kingdom, managed to escape from the palace.

She would be fated to revive the Order of the Moon and lead a band of knights on a mission to free Hegeria.

But can Lina and her friends really save the world from Antone’s dark grasp?

Pre-registration for LINE Little Knights opens up today. Players will receive Gacha Tickets and useful gameplay items (Rubies and Moonstones) depending on the number of pre-registrants. The presents get even more impressive as more people register, so everyone is encouraged to sign up! The registration prize will be awarded to all users upon logging in to LINE Little Knights after launch. Don’t pass this opportunity up!

February 1, 2018 to the day before service launch

Under its corporate mission “Closing the Distance,” LINE Corporation will continue to develop a variety of engaging and innovative content through LINE Games and its other services to bring users even closer together.

All information is true and accurate at the time of publiction, and subject to change without notice.