[Japan]"LINE LIVE 2017: By the Numbers" With Summaries on User Behavior and Other Data Published to Commemorate the Service's Second Anniversary

TOKYO – December 27, 2017 – To mark the second anniversary of the launch of its live streaming service "LINE LIVE," LINE Corporation has released "LINE LIVE 2017: By the Numbers" — a report that summarizes how viewers and broadcasters use the service.

LINE LIVE is a live streaming service that allows anyone with a LINE or Twitter account to stream live video with ease. While streamers can use LIVE stickers to manipulate their faces while they are broadcasting, viewers can show their support for streamers by sending them comments, hearts, gifts, and more.

After the service was launched on December 10, 2015 under the concept "LIVE is Real," the feature to host live streams was opened up to the public in August 2016, enabling general users to interact with each other as streamers and viewers. In addition to amateur streamers, there are also official channels featuring streams by celebrities and artists -- another favorite on the service among users of all ages.

24,126,651,933 hearts (Likes) and more than 278,750,000 comments were sent to streamers over LINE LIVE in 2017 — approximately 9x and 6x more than the previous year respectively. This increase indicates that many users are not just streaming and viewing, but are becoming more active in communicating over LINE LIVE than they were the previous year.

On December 21, 2017, "LINE LIVE OF THE YEAR 2017" was held to award live streamers – officially known as "LINE LIVERS" – who had most actively streamed and communicated with their fans. A comprehensive judgment was made based on the audience size, number of hearts (Likes), comments, shares, and content of each live stream of 2017, and a selected number of the best streamers were awarded in four categories: Promotion, Artist, Talent, and LINE LIVER.

"LINE LIVE OF THE YEAR 2017" page (available only in Japanese)

LINE LIVE aspires to become a new hub in the smartphone era that connects people, information, and content through live streams as it continues to generate exciting live-viewing experiences for its audience to enjoy together in real-time. 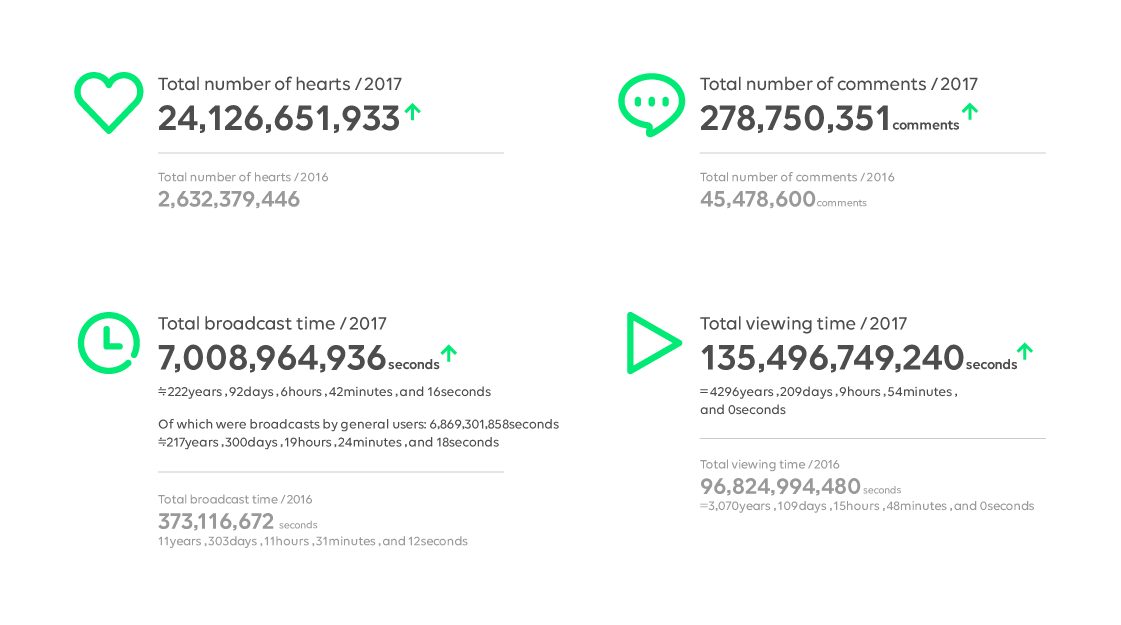 A closer look at the correlation between live streaming times and live viewing times indicates that they both begin to increase from 7:00 am, and reach their peak between 9:00 pm and 10:00 pm. This data implies that many users prefer to casually broadcast or watch live streams when they have a bit of time to spare, such as when they unwind at the end of the night before going to bed.