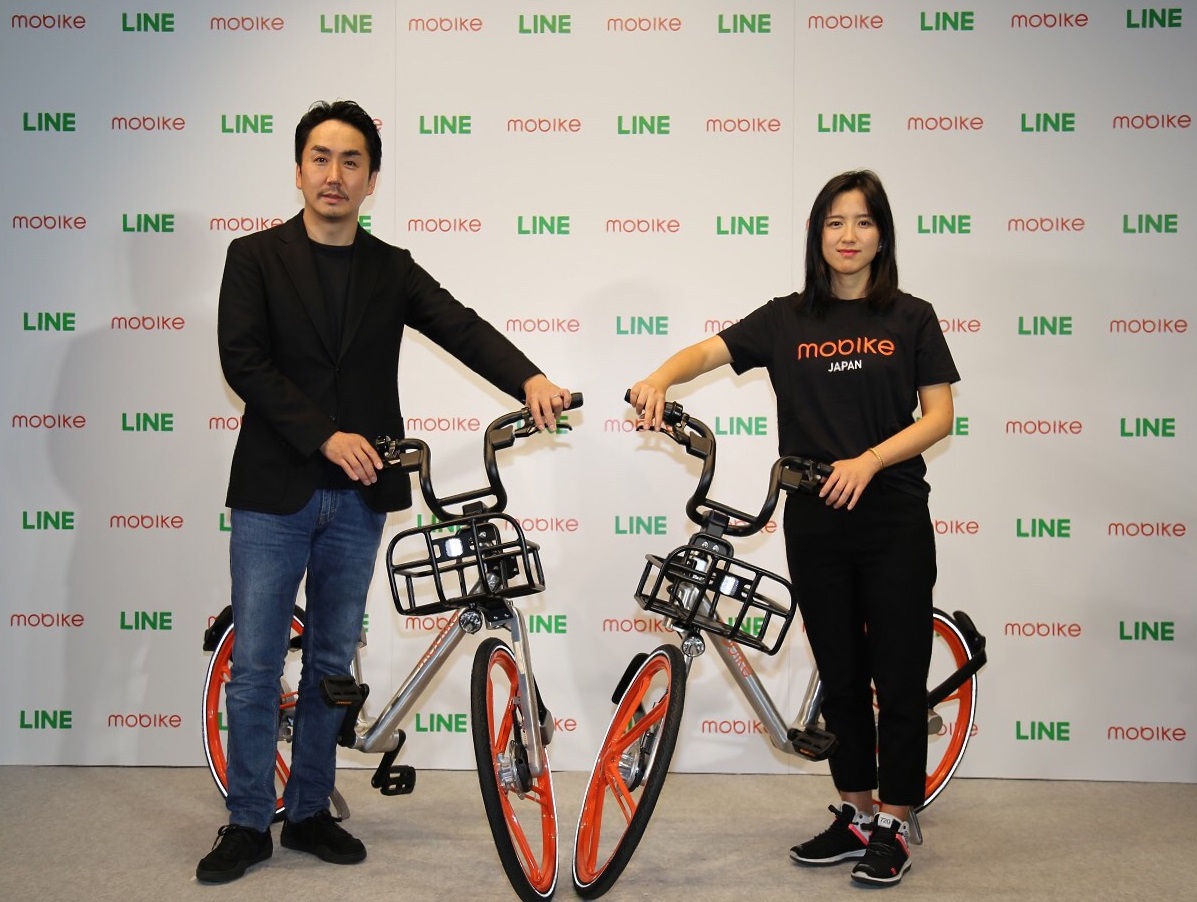 Mobike Japan is the Japanese entity of Mobike Ltd. ("Mobike"), the operator of the "Mobike" bike sharing service. Mobike launched its service by the same name in Shanghai in April 2016 and is growing into one of the largest bike sharing services in the world, with over 200 million registered users and, at its peak, is used over 30 million times per day across the over 200 cities around the world where the service is offered. Mobike Japan was established in June 2017 and started offering its service in Sapporo in August. In addition to not requiring any maintenance for four years, the high-performance bicycles used by Mobike are all outfitted with GPS, providing the convenience of being able to track the location of bicycles in real time as well as preventing bicycles from being abandoned.

LINE is advancing its strategy to use the LINE messaging app as a "Smart Portal," through which users can seamlessly connect with people, information, services, companies, and brands, online or offline, from anywhere and at anytime, 24/7, without leaving the app. LINE has been actively launching a variety of initiatives and services for its two pillars: A content platform, with news, manga, games, and others, and a life platform focused on payment, shopping, recruitment, and other services.

According to a survey by PricewaterhouseCoopers,* the sharing economy market is expected to grow from approximately 15 billion dollars in 2013 to 335 billion dollars in 2025, making it apparent that this market could expect to see tremendous growth on the world stage. In recent years, sharing services have also been on the rise in Japan, with bike sharing businesses also garnering attention from several companies making announcements that they will enter the market.

Through this capital alliance, the two companies will expand and accelerate the growth of the Mobike bike sharing service in Japan, with Mobike responsible for service operations, providing and maintaining bicycles, and developing the app and service system, while LINE will leverage its user base of 71 million monthly active users as well as provide support to create an infrastructure base by leveraging its network of relationships with government agencies, local governments, and companies. LINE is also making preparations to enable users to use Mobike from within the LINE app, tentatively planned for the first half of 2018. Going forward, LINE plans to make a capital investment into Mobike Japan and dispatch one director to its board.

The LINE app is a popular messaging service, boasting over 71 million monthly active users in Japan alone. Through this capital alliance, we will be supporting the growth of, and building on, the Mobike service in Japan not just through our massive user base, but also by making use of our network of relationships with government agencies, local governments, and companies that we have built up through our activities and services.

Bike sharing services have garnered much attention in recent years, so we are very excited to collaborate with Mobike and Mobike Japan – the largest bike sharing service in the world – and in growing this business. We will strive to provide LINE users with a service that will make their lives even more convenient and enjoyable through this alliance.

Comment from Hu Weiwei (Founder and President of Mobike Ltd.)

LINE is the clear leader in Japan’s social media space, with a strong culture of innovation and creativity, and therefore, is the perfect partner to support our ambitious growth plans in Japan. Mobike brings the best quality smart bikes specifically designed for dockless bike sharing, and an Internet-of-Things (IoT)-based operation solution to serve local users and communities in Japan.

Working together with LINE, we will be able to provide potentially millions of LINE users with a seamless and localized experience for finding, unlocking and paying for bikes right from within the LINE app.

Our ambition in Japan is to work with industry leading Japanese partners like LINE, as well as local governments and communities around the country, to bring Mobike to more cities in Japan and to set the global standard for bike sharing.

Business: Provision and operation of the LINE messaging app and content and services made available on the LINE platform, in addition to other web service businesses and AI businesses

About the Mobike Service

Using Mobike's original bicycles with on-board GPS and smart-lock technology, users can easily find, reserve, and unlock bicycles near them – all with a single smartphone app. Once the user arrives at their destination, they can complete their ride just by locking the bicycle. Mobike provides a sustainable transportation solution to urban residents across the globe by making in-city cycling more convenient, approachable, and smart.