LINE Corporation announces that it is now accepting pre-orders in Japan for a trial version of "WAVE," a smart speaker powered by the Clova cloud AI platform.

Developed by LINE Corporation, Clova is a smarter cloud AI platform that leverages the AI technology and the library of content and services of both LINE, which has the top share as a messaging app in Asia including Japan, and NAVER, Korea's number one search portal.

Clova was first announced by LINE in March at Mobile World Congress 2017. The platform was further positioned as the company's most daring venture for the next five years at the LINE Conference 2017 held in June, where the WAVE smart speaker – the first device to be powered by Clova – was also demonstrated.

Pre-orders for a trial version of WAVE began from July 14, on the official Clova site in Japan.

Selling for 10,000 yen (including tax), devices are expected to begin shipping in late July.

With music playback as a core feature, the pre-release version of WAVE will provide a number of features to enrich and improve users' lives through communication with the device. Users can ask WAVE to play music, provide the day's weather, or engage in casual chat and set alarms for themselves in Japanese.

The music feature [is further highlighted] by being bundled with six months' of free access to the streaming music service LINE MUSIC (960 JPY a month for general users; 480 JPY for students (tax included)), where users can listen to over 40 million tracks. *1 In addition to specifying the music they want to hear by song title or artist, WAVE can also provide recommendations based on the situation or the user’s mood. WAVE has also been designed with attention to sound quality, providing full-range stereo sound with its 20-watt woofer and two 5-watt treble tweeters. WAVE also delivers excellent voice recognition capabilities, with its Conexant Systems microphone and superior noise canceling technology, allowing voice commands to be heard from over five meters away. WAVE also comes with a battery to allow users to freely move the device to their living room, bedroom or anywhere else they desire. Users can also use WAVE as a Bluetooth speaker to play music from their smartphone or other devices.

The official release version of WAVE is scheduled to go on sale in Japan starting this autumn at a price of 15,000 yen (tax included). A software update will be made to trial versions of WAVE to give users access to the full array of features available to the official release version, including reading out news stories, managing schedules, and operating home appliances with infrared controllers.

“I am ecstatic that, following our initial announcement of Clova at Mobile World Congress 2017 in March, our project team was able to come together to develop and complete preparations to deliver the WAVE smart speaker to all of you. At present, WAVE is being positioned as a pre-release, trial version that can be updated when the official release version goes on sale, and we are planning to continually expand the number of available features going forward. There are limitations on what you can do with this trial version while we are still in the development stages, but we hope that everyone can feel like a part of our development team as they help us nurture the still-nascent Clova and WAVE technologies.”

Through Clova, LINE is aiming to create a world in which AI can seamlessly blend into every device, scenario and environment. As it strives to fulfill its corporate mission of "closing the distance," LINE will use Clova to help bring users as close as they want to information, services and the people in their lives. 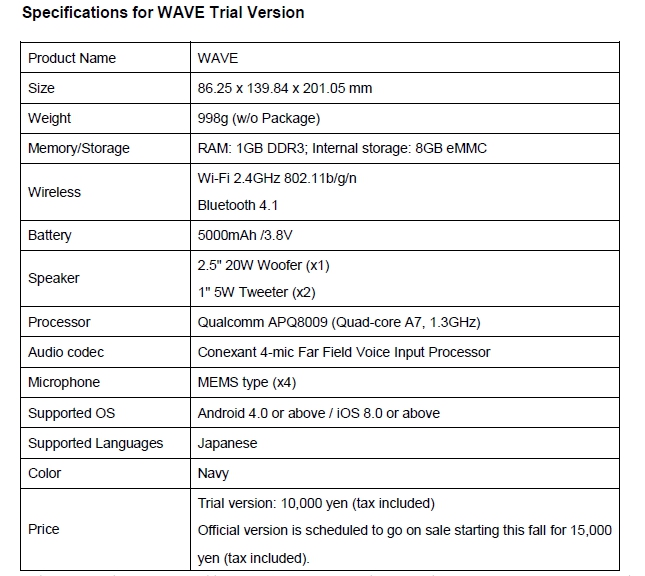 Note: Specifications are subject to change. A LINE ID and the dedicated LINE Clova app are required to use WAVE The LINE Clova app supports Android 4.0/iOS 8.0 or above. Usage registration can be performed by connecting to the WAVE from the LINE Clova app.