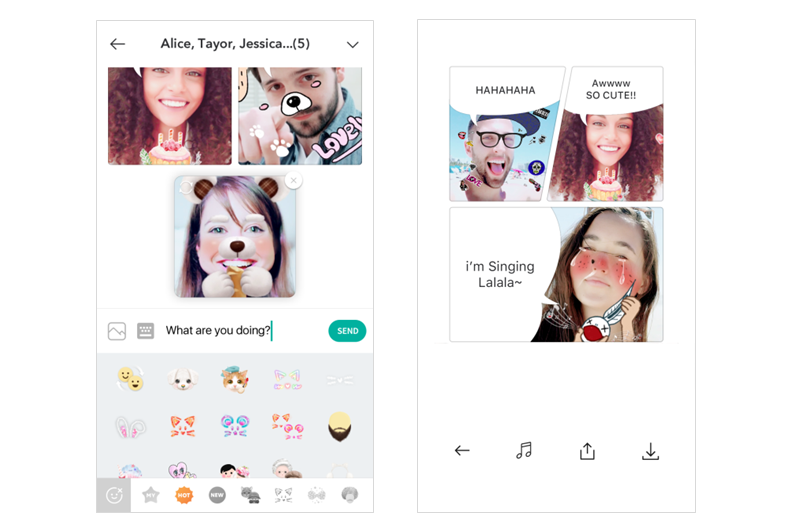 Using the “Play” feature, users can combine short selfie videos with messages from their chat conversations.1 Users can exchange videos and texts over the B612 chat interface2, and then share a multi-panel video comic strip of the chat on their social media pages. Users can give their one-second selfie videos a comic-ready facelift by adding animated stamps that produce special, cartoony effects triggered by facial movements. Meanwhile text messages are displayed in speech bubbles, giving users and their friends free reign to play with their chats and videos to create lively, colorful comic strips. 3

＊2: Messages sent over the B612 chat interface are automatically deleted after 24 hours.

＊3: Up to five videos can be selected (between five and ten panels total when combined with message-only panels).

Geared by its massive user base in Asia and non-Asia markets such as Latin America and Eastern Europe, B612 has achieved 250 million downloads worldwide since its launch in August 2014. In the wake of the selfie syndrome that has swept across the world, B612 is responding to the ever-changing needs of younger generations by creating another playful way of communicating and enjoying selfies with loved ones and friends.

B612 is continually adding new animated stamps, filters, and selfie-optimized features in order to provide the best selfie experience for users.

B612 is a dedicated selfie camera app which allows users to customize their photos with a wide variety of filters and effects. It offers over 200 different animated stamps that produce various effects triggered with facial movements, over 100 filters, a collage function, and other selfie-optimized features.

B612 launched in August 2014, just in time to catch the growing wave of “selfie culture” that has since spread worldwide. The app rapidly expanded its user base in Asia as well as Latin America, Eastern Europe and other regions quickly after launch, and subsequently reflected insights gained from user tests to continuously improve its features so that taking selfies is easier than ever. As a result, the app topped 200 million downloads worldwide in August 2016, two years after its launch.