Tokyo, Japan — October 27, 2016 — “LINE POP Chocolat,” a free-to-play, hexagon-based puzzle game from LINE Corporation for iPhone and Android devices, has been released in markets around the globe today, October 27. 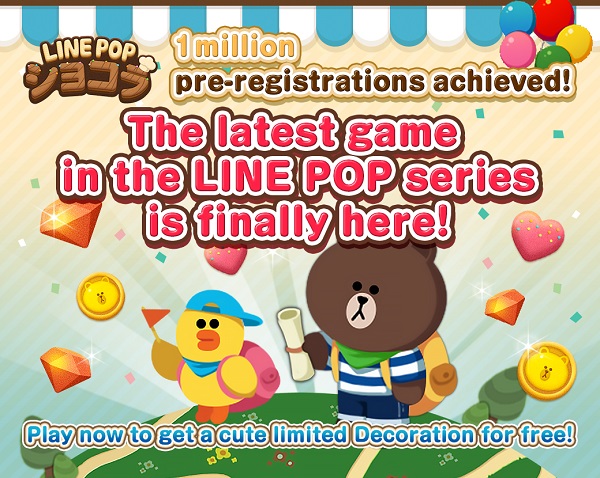 Rewards Commemorating Over One Million Pre-Registrants

LINE POP Chocolat stars Brown as he traverses the world over in search of the legendary chocolat. The new puzzle game is being officially released today under great anticipation, with more than 1 million users worldwide pre-registering since September 26, 2016. To celebrate this massive response, all users who log in to LINE POP Chocolat during the launch window will receive 40 Rubies, 1000 Gold pieces, and special Sally and Brown LINE Character decorations.

In conjunction with the game’s October release, players will also be able to acquire four different limited edition Halloween Decorations by fulfilling different conditions. These conditions are detailed via in-game notices. 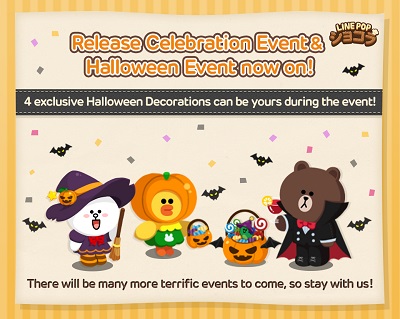 ■Unlimited Play Tickets for 3 Days Only!

Furthermore, in the first four days of launch, players will be able to play to their heart’s content with unlimited play tickets (hearts). It will be a special opportunity to get a big head start in the game!

The special events don’t end there—LINE POP Chocolat will also be hosting a friend invite event (where users can earn in-game items, decorations and rubies according to the number of friends they invite), as well as a special login event and chapter clear events. It’s the perfect time to join Brown on his search for the legendary sweets of Chocoland.

As part of the LINE Games portfolio, LINE POP Chocolat is the third and latest addition to the phenomenally popular series LINE POP, a series that has cumulatively achieved more than 60 million downloads worldwide since the release of the original LINE POP in November 2012.The second installment, LINE POP2, maintained LINE POP’s concept of eliminating hexagonal blocks by lining up three or more of the same character blocks but also offered new challenges that required a high level of strategy to clear. Now, in this ever sweeter and tantalizing threequel, players are dished up a whole new slew of challenges and special block categories as well as cakes and chocolate when they successfully line up blocks.

Other exciting new features of LINE POP Chocolat include “Decorations,” items that players can apply to stage maps to give Chocoland a visual makeover, and “Landmarks,” an item designed after famous buildings and other landmarks around the world that take players on a virtual, globe-trotting journey. Both items can be obtained during gameplay and are bound to sweeten up players’ adventures in the world of LINE POP Chocolat.

Under its corporate mission “CLOSING THE DISTANCE,” LINE Corporation will continue to develop a variety of engaging and innovative content through LINE Games and its other services to bring users even closer together.