LINE Announces Plans for Expanded Development and Proliferation of Chatbots

On April 7, 2016, LINE began the free provision of LINE BOT API Trial Accounts that allow anyone to develop chatbots for LINE. This trial provision has allowed external parties to freely develop approximately 20,000 LINE chatbots to date. Now, to more aggressively promote chatbot development by third parties and greater widespread use by the general public, the company made a series of announcements regarding its plans for the further growth of chatbots at LINE DEVELOPER DAY 2016.

During the presentations today at LINE DEVELOPER DAY 2016, LINE announced a new Messaging API with even better bot functionality and development capabilities along with better support for developers.

The New Messaging API introduces three new message types: 1.) A new “confirm type” that allows for just a simple selection between two choices such as a “yes” or “no” response; 2.) A “button type” that combines pictures, text and other action buttons; and 3.) a “carousel type” which allows the same data from a button type message to be placed in a horizontally scrolling format so that multiple content can be displayed. These new message types sent by chatbots allow companies to realize a smoother LINE-based contact point with users for their services and content. LINE plans to introduce even more message types in the future. 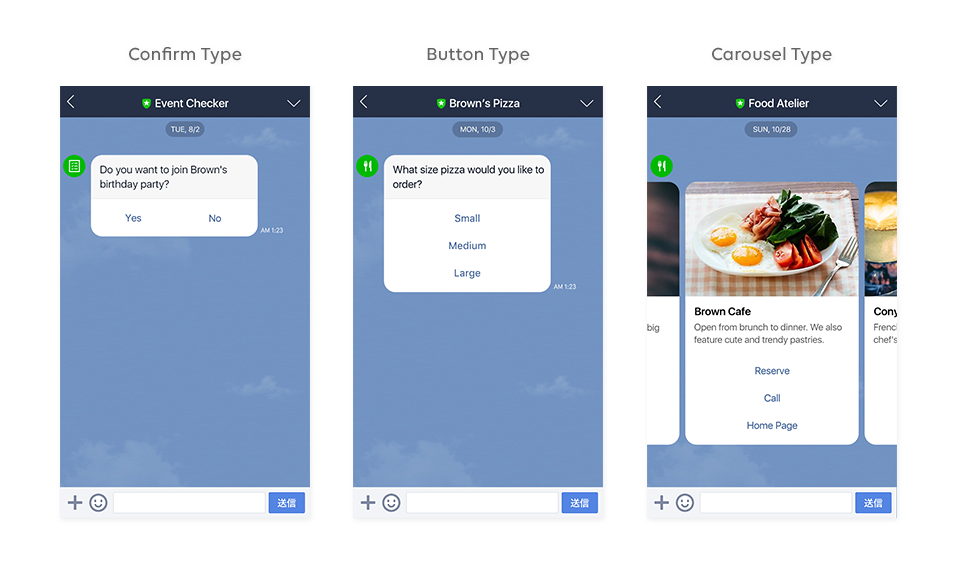 Chatbots developed using the new Messaging API can be used in group chats with multiple users on LINE, allowing information and content to be shared in conversations with multiple parties.

Compared to the LINE BOT API released in April, the new Messaging API is cleaner and simpler. Furthermore, API documentation has been overhauled, with improved readability and expanded sample code (https://devdocs.line.me ). LINE has also released an official SDK supporting five languages (Java, Go, Ruby, PHP and Perl 5), making it easier than ever for developers to create chatbots.

To create a Messaging API account, developers can register on the LINE Business Center (https://business.line.me), a portal site created for businesses to manage LINE@ accounts and LINE login information.

Pricing System for Messaging API Use

Until now sending messages via the existing LINE API was limited to companies and partners using LINE Business Connect (a service for corporate clients that provides an API allowing access to various LINE account features). However with the release of the new Messaging API, entities with LINE Official Accounts and LINE @ Accounts can also now send API-enabled messages. LINE Official account holders are charged according to the number of messages sent, and LINE@ Account holders will be charged according to the provisions of optional contracts set for each plan.

Furthermore, messages sent by accounts to users can now be divided into two categories: push messages actively sent by chatbots and reply messages immediately sent in response to messages or info sent by users. All reply messages sent free-of-charge regardless of account type, plan, or sent message total.

To encourage as many developers as possible to develop chatbots and see a variety of new services emerge on the LINE app, LINE Corporation is conducting the LINE BOT AWARDS (https://botawards.line.me/ ) to recognize accounts providing new value to the user experience through the power of chatbots. Any individual or corporation is free to compete, with LINE providing a maximum of 10 million yen to the winner and other rewards for various other categories. Details will be announced in mid-October. The application deadline will be in the beginning of January 2017, and the results announcement and awarding ceremony are to be held in February. Further details and updates will be provided via the dedicated LINE BOT AWARDS page.

Note: Some award categories may ultimately not be rewarded if no suitable candidates are discovered after internal review.

LINE Notify is an API-based service that enables external web services and applications to send notifications to users as LINE account messages. Starting today, this service is connected with the web-task automation tool IFTTT, which means that users can receive weather information, e-mails including specified keywords or other notification messages from various services without anyone performing any additional coding. At the same time, for developers, LINE Notify now supports the source code repository service GitHub and the server monitoring platform Mackerel. Various notifications can be sent received over LINE by making settings in LINE Notify or these services themselves.

By completing service registration (and any necessary programming), anyone can use LINE Notify to implement LINE-linked notifications free-of-charge. Furthermore, by issuing a personal access token, developers can easily send notifications without making any settings. 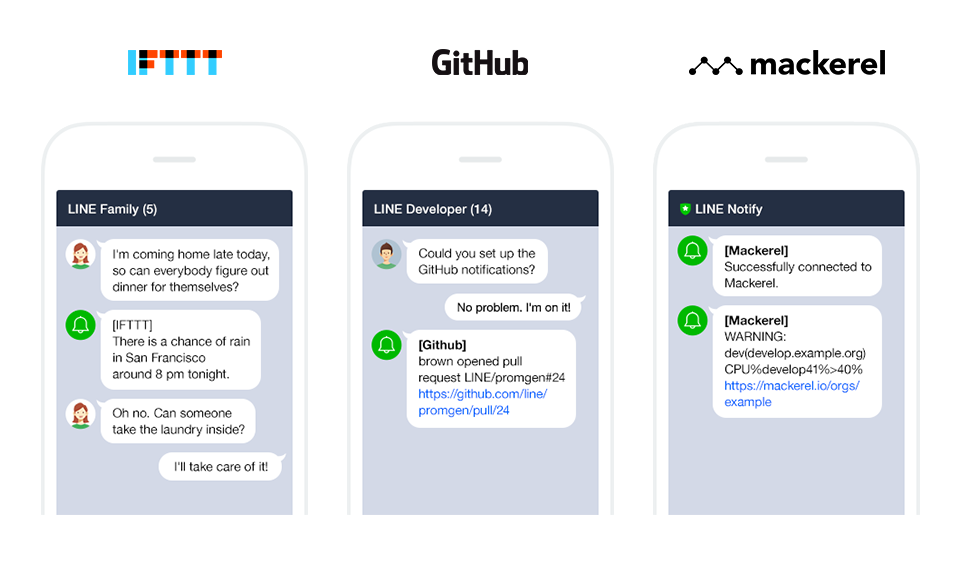 Note: Per the LINE Notify Terms and Conditions of Use (https://terms2.line.me/line_notify_terms_of_use?lang=en) use of LINE Notify for advertising or sales promotion purposes is prohibited.

Ahead of the public release of the Messaging API, LINE has been developing chatbots internally and with other partners and providing new services incrementally.

Starting September 29, NAVITIME JAPAN Co. Ltd. is distributing a chatbot that links with the company's existing train time and transfer information to allow users to easily search for transfer routes, timetables and train delay information via their LINE account. Users can not only search using natural language (such as by simply typing “Shibuya to Shinjuku”), but also get the latest transfer suggestions and delay updates with a single tap by registering travel info in advance. New features such as push notifications for train malfunctions and delays are to be added at a later date.

Connected with the on-demand music streaming service LINE MUSIC, the LINE MUSIC Search account allows users to search and listen to audio samples of rankings, songs their friends are listening to, and song recommendations from LINE MUSIC all within a LINE chat. Users can also easily search among the 18 million songs available on LINE MUSIC by artist name, song title or lyrics.

LINE Corporation is striving to create a “Smart Portal” that seamlessly connects people to others and the information, services, companies and brands they need—both online and offline—24 hours a day 365 days a year, with the LINE app acting as the gateway. As one part of this initiative, LINE is maximizing the potential of its messaging app and engaging in the development and proliferation of various chatbots that encourage deep, real-time communication between users, companies and services.

Under its corporate mission “CLOSING THE DISTANCE,” LINE Corporation is actively engaging in various initiatives to strengthen its ties with not only external companies and partners but also external developers as it strives to bring people closer to a wide variety of information, services, and products.