Marks Fifth Anniversary by Announcing Their Mission "Closing the Distance" and to Become a "Smart Portal" Linking People to People, Information, and Services

The event commemorated the upcoming fifth anniversary of the LINE app that launched on June 23, 2011, and announced the company's corporate mission embodying the various services that LINE provides to connect people to people and to society. Beginning with the past, LINE outlined its vision for the future.

As a way to make this mission a reality, LINE aims to become a "Smart Portal," through which users can access the people, information, services, companies, and brands they want, online or offline, anywhere they are and anytime they need to, 24/7.

LINE's plan is to transform from the world’s #1 mobile messenger into the world’s #1 Smart Portal, enabling people to connect to other people and various information, services, and products, through LINE.

LINE's goal is to become an entity that is as comfortable to be with as the family and friends that people have, providing an environment where anyone's day may literally begin and end with the service.

Based on their mission and vision, LINE Corporation made key announcements in the fields of: 1. Opening their business platform and expanding the functionality of their ad distribution platform for more timely and relevant matching between users and businesses; 2. Proposing new systems for online and offline payments via smartphones and a new point system; 3. Providing a smartphone communication infrastructure addressing the needs of individual user needs. The following is a brief overview of what was announced.

Since launching on June 23, 2011, the LINE app has grown into a global service surpassing 1 billion users and achieving an MAU (Monthly Average Users) of 215 million (as of December 2015). Milestone achievements and the latest figures* were announced.

A grand total of 258,000 sets of stickers have been offered (as of end of February 2016), with a maximum 2.4 billion stickers actually being sent and received on a single day. Total sticker sales for 2015 reached JPY 25.3 billion, providing steady growth in terms of users and sales amount as a pioneer in sticker-based communication.

Additionally, the top 10 creators on LINE Creators Market, a platform where users can create and sell their own stickers, averaged total sales surpassing JPY 223 million. What’s more, characters born from stickers have made their way into various merchandise and animations, expanding their realm far beyond stickers only.

Adding new potential to this trend is LINE’s announcement that they will be releasing new Pop-Up Stickers that cover the entire chat screen, starting summer 2016.

In addition to bolstering LINE titles targeting the mid-core sector, the company is also working on new projects in partnership with Translimit Inc., Smilegate Megaport, Sundaytoz, Inc., and Green Monster, a joint venture with CyberAgent, Inc.

The following new titles planned for release in 2016 were announced today. 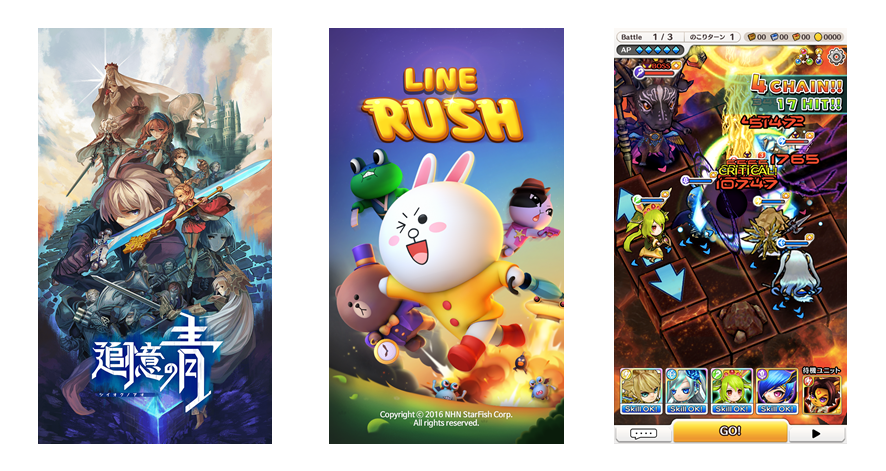 The company has opened 44 "LINE FRIENDS STORE" locations specializing in LINE character merchandise in 11 countries throughout the world, including pop-up stores. These stores are especially popular in China, where a total of one permanent store and six pop-ups were created, with new stores scheduled to open in Beijing, Guangzhou, and Chengdu, sometime in 2016.

It was also announced that the LINE characters had been inaugurated as special ambassadors to the "Universal RE-BOOOOOOOORN!" festivities commemorating the 15th anniversary of Universal Studios Japan theme park located in Osaka.

Since its launch on June 11, the fixed-rate on-demand music service "LINE MUSIC" has exploded to account for over 15 million song titles and over 10 million app downloads. LINE MUSIC Daily Active Users (DAU) quadrupled (as of February) after background music functionality was added to the LINE main app's profile pop-up as a measure to improve integration between the LINE app and LINE MUSIC.

LINE announced that to further bolster integration between the two services, a new feature enabling songs from LINE MUSIC to be selected as the ringtones for free LINE calls is on its way (scheduled for April 2016).

LINE LIVE is a streaming content distribution platform that capitalizes on LINE's smartphone user base, high activity rate, and push notification scheme. In the three months since the service was launched on December 10, 2015, the aggregate total of viewers surpassed 100 million (reaching 198 million), and the service is actively enjoyed by a wide range of users.

Although Casts are currently set to mainly feature celebrities, Casts by individuals are set to be supported in the future. Along with individual Casts, the service is scheduled to start supporting "virtual gifting," in which viewers give casters tips, later in 2016.

LINE is opening up its business platform as part of a strategy to bring users, companies, and services, closer together through LINE, thereby developing a better relationship among all parties. This will help shape a future in which users can use LINE and other companies' services even more conveniently, easily, and enjoyably.

LINE has taken the platform used for its own LINE NEWS, LINE LIVE, and LINE Part Time Job services, and has tuned and strengthened it for open use by operators of web services referred to as Official Web Apps.

Users, on the other hand, enjoy easy and quick access to various services within the LINE app, without having to install other apps or sign up for other services.

LINE has started approaching a number of companies, and as of today over 40 companies in a wide range of sectors have expressed their intention or interest in becoming Official Web Apps. A release is expected in summer 2016.

LINE is also implementing an SME Partnership Program, through which LINE@ business account communication features can be incorporated and utilized by small and medium-sized enterprises such as restaurants and retail shops. Commencing this summer, a total of 14 small and medium-sized companies including top players in their respective industries such as Tabelog for restaurants, Hot Pepper Beauty for beautification and hair care, Demae-Can for food delivery, HOME'S for real estate, and Goo-net for cars, will be joining. Through this program, a large number of SME's will be able to promote communication with LINE users more easily and conveniently.

Starting in April 2016, LINE will be opening up its platform to enable external partner companies to develop plug-ins to incorporate additional functionality into official LINE accounts, much like the way Reward Cards, Coupon Book, and Commerce do.

LINE's messaging API will be made freely available in order to deepen real-time communication between clients and their customers. The BOT API free trial will be made available to 10,000 people on a first-come-first-served basis this April, together with LINE Beacon, connecting physical businesses with potential customers in the area. LINE also plans to further develop its proprietary Chat AI Plug-in together with third party developers, to provide business accounts with an intelligent and responsive tool for handling customer inquiries through chat messaging.

Together with the opening of LINE's business platform, LINE's advertisement distribution platform will be expanded beyond its previous one-way mass delivery systems appropriate for only larger businesses, to deliver more relevant and personal advertisements to suit any business size.

Furthermore, the "Creators' Stickers for Business" program is scheduled for release later this year, in which small and medium-sized businesses will be able to purchase the right to distribute promotional stickers as rewards for service purchases or related incentives via the LINE Creators Market platform.

In addition to five major metropolitan banks, LINE Pay is expanding its partnerships with regional banks across Japan as well as with direct banks, aiming to build an environment where users can easily add money to their card anywhere for free. Auto deposit features and deposit-only accounts provided through Japan Net Bank, Limited for the service are also being launched today.

LINE Pay is expanding both offline and online affiliate locations.

LINE Pay Corporation, in partnership with JCB Co., Ltd., has launched LINE Pay Card, a prepaid card usable at roughly 30 million JCB affiliate locations Japan and abroad, today. All LINE users can apply for this card. Users can enjoy 2% rewards as LINE Points (2 Points are awarded for every JPY 100 spent by the user).

"LINE Points" is a point reward program for the LINE platform. 1 Point is equivalent to JPY 1, and 1,000 or more Points can be converted into a part of users' LINE Pay balances. In addition to today's service launch, the opportunities in which LINE users will be able to acquire and use points will be gradually expanded. Furthermore, the existing LINE Free Coins reward program will be incorporated into LINE Points on April 25, 2016, allowing users to earn LINE Points from within the LINE main app.

LINE announced its intent to improve mobile infrastructure as a mobile virtual network operator (MVNO), connecting people and people, as well as people and content.

LINE Mobile enables reliable quality and affordable price plans tailored for the user's needs. The service has also partnered up with major industry names Facebook and Twitter to offer unlimited use of said services' main features in addition to LINE on the MVNO.