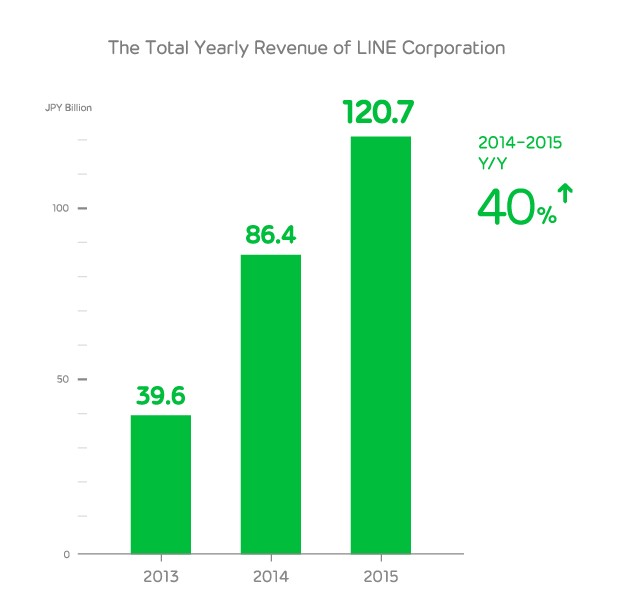 *1 Consolidated performance including subsidiaries such as LINE PLUS Corporation and LINE Business Partners Corporation.

The Monthly Active User (MAU) count for LINE (as of December 31, 2015) totals 215 million, with 144.7 million of that total deriving from LINE’s top four countries in terms of market share (Japan, Taiwan, Thailand and Indonesia). Rapid growth in Indonesia continued from the third quarter, and MAU rates in LINE’s other top three markets as well as the Middle East are increasing.

In the Sticker business—the main pillar of LINE’s communication business—sales continue to grow steadily in and outside Japan for official stickers showcasing popular mascot characters and other intellectual properties, as well as creators stickers created and sold by users on the LINE Creators Market. Official stickers featuring animation and sound remain popular, further contributing to sales. The LINE Creators Market is an ever-more vital venue for creators to showcase their creations, with top creators in Japan teaming up with popular intellectual properties to create new stickers, other top creators releasing books of their original characters, and more new opportunities for creators always in development. The LINE Creators Market is also growing in popularity in Taiwan and Thailand. Popular creators are hosting a myriad of offline events and, just like in Japan, strong creators stickers sales are lifting overall sales. LINE will continue to focus on fostering top creators in these countries and expand the opportunities and venues for creators to show off their talents.

Games are the main pillar of LINE’s content business, and LINE GAME released 7 new titles globally in the fourth quarter of 2015. Existing titles like LINE: Disney TsumTsum and LINE PokoPoko increased their sales, particularly in countries outside Japan. LINE is also focusing on mid-core genres, and released the action RPG Fortisia together with Sega Networks Japan, and the game is steadily adding new users. Fortisia is the first release in a new partnership with the game developer, with LINE serving as the marketing partner—this role as a marketing partner is also a new business model for LINE. While maintaining its focus on puzzle and other casual games, LINE is also making preparations to release a variety of mid-core games in 2016.

In the Advertising business, LINE continues to see steady growth in advertisers taking advantage of its official account, sponsored sticker, LINE Free Coins and other marketing platform services that connect companies and consumers. The Advertising business accounted for approximately 30% of LINE Corporation’s total sales in 2015, up from approximately 27％ in 2014. LINE began testing the display of advertisements on the LINE Timeline in Japan in November of 2015, and proceeded to conduct trial operation for external clients in December. In light of the success of these trials, LINE is making step-by-step preparations to commence full-scale operations in Japan and other countries with large numbers of LINE users, such as Thailand, Taiwan and Indonesia. LINE Business Connect, a business-oriented API, has been introduced by more than 50 companies in Japan, who have successfully deployed the service for everything from food delivery to banking, and who have improved back-and-forth communications with their consumers as a result.

LINE also continues to develop its services into a broader platform. LINE NEWS, a news distribution service available in Japan, has successfully launched the “LINE Account Media Platform,” a new service which allows external media outlets to distribute news by creating an Official Account. LINE NEWS topped 22 million monthly active users in December 2015. LINE LIVE, a new live streaming platform that provides live video and programming free of charge, launched on December 10, 2015 and received more than 11 million unique viewers in its first month. Both of these services are exhibiting strong growth immediately after their respective launches. Meanwhile, the video-on-demand service LINE TV available in Taiwan and Thailand is steadily increasing users by offering more and more dramas and variety programs that suit the tastes of the respective regions. LINE Part Time Job has over 6 million registered users in Japan, and the new LINE Oubo (“Job Apply”) feature, which allows applicants and companies to exchange all necessary communications between the application stage to the hiring stage over LINE, has been well-received, with more than 82% of users using the new feature.

LINE is dedicated to expanding its existing services and developing promising new content and services to grow its platform as it aims to expand its user base worldwide.

In 2015, advertising sales and sales in our other major markets outside of Japan increased significantly, allowing us to achieve balanced overall growth. Our efforts to evolve into a platform have progressed particularly well in Taiwan and Thailand, where sales are also significantly increasing. According to the “Top Publishers of 2015: Worldwide

iOS & Google Play Revenue Outside of Games” list released by App Annie＊2, we have earned the number one spot for the third year in a row, demonstrating the stability of our revenue base and our presence as a global entity.

Looking ahead in 2016, we will continue to refine our messaging app as a hub to a broader LINE platform and aim to increase the number of countries where we are the market leader.