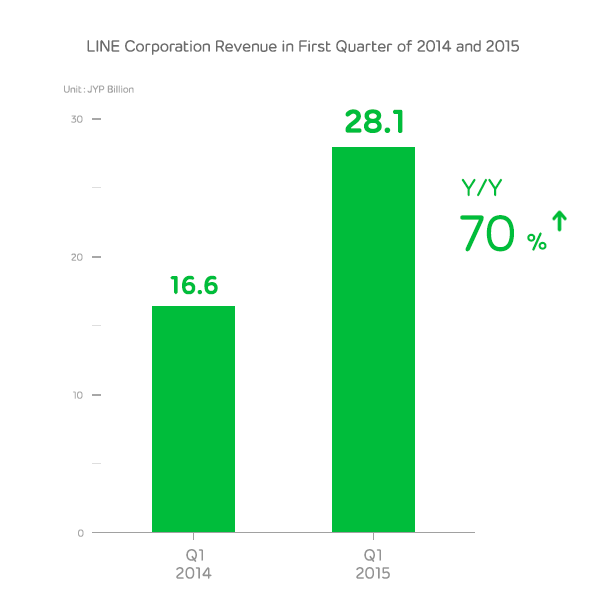 ＊1: Consolidated performance including subsidiaries such as LINE PLUS Corporation and LINE Business Partners Corporation.

The Monthly Active User (MAU) count for LINE (as of March 2015) totals 205 million, with 123 million of that total deriving from LINE’s top four countries in terms of market share (Japan, Taiwan, Thailand and Indonesia). With the recent rapid acceleration of user growth in Indonesia particularly noteworthy, the number of new users and MAU have continued to show strong growth globally.

For the Sticker business, official stickers continue to sell strong in various countries, with stickers that play sound (first released in January) being particularly well-received, leading to growing sales outpacing initial projections. LINE is continually adding new stickers for users to purchase and download. LINE Creators Market, a platform that allows users to sell and buy stickers created by other users, has reached 100,000 sticker sets, and will celebrate its first anniversary next month. Sticker sales are increasing steadily with a large number of participating creators building excitement for the service. Moving forward, LINE will focus on growing the service in Thailand and Taiwan, and intends to further improve the platform so that creative creators can enjoy the profits for their superb designs.

LINE GAME released 10 titles in the first quarter of 2015. LINE Bubble 2, a bubble-shooting game starring LINE characters, recorded 1.4 million pre-registrants, the most in LINE GAME history. Having generated considerable public interest, LINE Bubble 2 continues to show steady growth in user acquisition after its immediate release. Furthermore, LINE: Disney TsumTsum achieved 40 million downloads in February, as it continues to perform strongly in the US, Thailand, Taiwan and other markets across the globe. While game localization still continues in Thailand and Taiwan, games designed exclusively for these markets (LINE God of War in Taiwan and LINE Nikki in Thailand) are gaining significant user bases as well. In addition to maintaining its high position on the revenue rankings for casual games, LINE is also focusing attention on mid-core genres. The company will also create new titles using character IPs to further expand the user base of LINE GAME and accelerate sales.

In the advertising business, LINE Free Coins, an Official Account-sponsored sticker incentive program, is being used by a growing number of businesses as the service continues to spread in various markets around the world. LINE continues to provide new advertising services, such as LINE Sponsored Themes—a marketing option that allows businesses to deliver themes built around their brand mascots to LINE users—and LINE Must View Stickers—a new sticker distribution model available in Japan and Taiwan that only allows users to download stickers after viewing video advertisements. LINE will continue to lead the way in developing new advertising services worldwide.

As for the company’s strategy going forward, LINE Corporation will strive to acquire leading market share in even more countries, and in the four nations where it has already obtained the leading market position, it will continue to drive ahead with its LIFE Platform Strategy, with the aim of making LINE an app that provides content and services that are even more integral to modern people’s lives. LINE’s further development as a platform is being achieved through the launch of the mobile payment and fund transfer service LINE Pay last autumn, along with various other new services including publically viewable accounts for businesses and individuals via LINE＠,the video distribution service LINE TV (available in Thailand and Taiwan), the e-shopping services LINE MALL (Japan) and LINE MART (Taiwan), the taxi service LINE TAXI (Japan), the food delivery service LINE WOW (Japan), and the part-time job information service LINE Part Time Job (Japan). As it moves ahead, LINE will continue to develop an endless stream of innovative new content and services.

Last year, we decided to expand beyond a simple messenger app, and announced our LIFE Platform Strategy. Under this strategy we launched multiple new services in 2014, and in the first quarter of 2015, we have repeated this success. These new services in 2015 are off to a strong start, winning the support of even more users than we initially projected at the start of the year. We will build on these early successes and expand these services so that they can become the market leader in their respective categories.

LINE believes this year will test our true value as we aim to be the leading “LIFE Platform” for smartphones worldwide. As we move LINE into its next stage, we will strive for greater business growth, greater innovation and a greater global presence, as we move ahead at a speed faster than ever before.

Aspiring to become a platform for everyday life for all users through both current and new businesses, LINE will develop a variety of new business models, establish new paths for growth, and increase the convenience provided to its users, all while moving at a faster rate and on a larger scale than ever before.