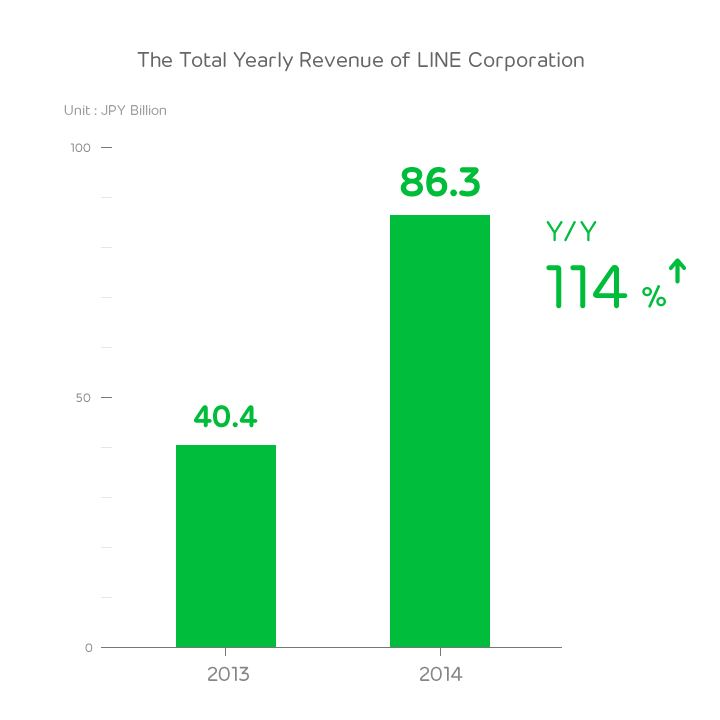 The Monthly Active User (MAU) count for LINE is at 181 million, and in the 3 countries (Japan, Taiwan, and Thailand) where LINE holds the top share, the MAU is 92 million. In regards to the number of registered users in individual countries, Turkey surpassed 10 million users, bringing the total number of countries with more than 10 million users to 13. Both the number of new users and MAU have continued to show strong growth.

For the Sticker business, animated stickers have performed well in Asia. In the Western market, LINE has worked to provide animated stickers that reflect each region’s culture and trends. LINE Creators Market, a platform that allows users to sell and buy stickers created by other users, reached 270,000 registered creators in 145 countries worldwide in November 2014, just 6 months after starting service in May 2014. The average sales for the top 10 grossing stickers reached JPY 36.8 million. The service is growing to become a platform where creators with excellent ideas and a little innovation can profit from their creations.

LINE GAME released 6 new titles in the fourth quarter of 2014, including 3 titles that feature LINE characters. In Japan, Taiwan, Thailand and other regions in Asia, the company continued the offline marketing and TV commercials from last quarter for titles such as LINE Get Rich and LINE Rangers, expanding the LINE GAME user base and contributing to greater sales for the games division. LINE: Disney TsumTsum achieved 30 million downloads in October, and with TV commercials and offline user events held in the Korea, Taiwan, and the United States, the game has shown an increase in new user acquisition.

In addition to maintaining a high place on the revenue rankings for casual games, future goals for LINE GAME include providing RPGs (role playing games) and other titles targeted towards mid-core users in the first half of the next fiscal year. In markets such as Taiwan and Thailand, the company plans to collaborate with local game developers in order to provide games tailored to individual markets in an effort to expand the LINE GAME user base worldwide.

The advertising business released LINE Free Coins for iPhone in December 2014, a service that originally was only available for Android. The number of companies utilizing this feature has grown significantly. This growth has been especially marked in the Taiwan and Thailand gaming sectors, in addition to Japan. Many companies have chosen to take advantage of the LINE Free Coin Video ad option, an incentive-per-view business model, as a new marketing tool. LINE@, a service providing business accounts catering mainly to retailers and small to mid-size corporations, started operating in Taiwan as well in September 2014. The service recorded 130,000 registered stores as of the end of 2014, showing a fast-paced trend for growth. Going forward, LINE plans to develop LINE@ globally and aims to expand the service’s user base by making it available to both individual users and companies.

Through developments such as the mobile payment and fund transfer service LINE Pay which will serve as the core of LINE’s development as a platform going forward, the company has reinforced its foundation as a platform in each business sector by releasing the food delivery service LINE WOW (available only in Japan), establishing a new gaming company, and acquiring the radio music distribution service Mix Radio. In order to further the localization of its services, LINE also started the video distribution service LINE TV in Thailand and the shopping service LINE LUXURY DEAL in Korea.

Looking back on 2014, it truly was a decisive year. We decided not to settle as just a simple messenger app, but instead resolved to become the world leader in platform development with our LIFE and Entertainment platforms as the centerpieces of our efforts. Along with this new strategy, we shifted gears starting in the fourth quarter of 2014, switching from a focus on increasing our worldwide user numbers globally to a strategy where we focus on high priority markets and proactively invest in markets where we hold the top share, such as Japan, Taiwan, and Thailand. We are also focusing on markets where we are in close competition for the top share, including Indonesia, the Philippines and other Southeast Asian countries, as well as South American countries like Colombia and Mexico. Finally, we are also focusing on breaking into markets such as the United States where would be considered a challenger.

As for our new businesses, we will be proactively expanding LINE Pay, a service that we started in December 2014, and O2O (online to online) businesses such as LINE@ in 2015. We will also expand our entertainment sector services by advancing into the music distribution industry, and globally marketing LINE Manga, our e-comic service for smartphones already available in Japan.

Aspiring to become a platform for everyday life for all users through both current and new businesses, LINE plans to develop a variety of business models, establish new paths for growth, and increase the convenience provided to its users faster and on a larger scale in the future.