Tokyo, Japan – October 29, 2015 – LINE Corporation, owner and operator of the free call and messaging app LINE, has announced the release of “LINE Cube Heroes,” a new block-based puzzle game available for free on both iPhone and Android devices, through its gaming platform LINE Games. *1 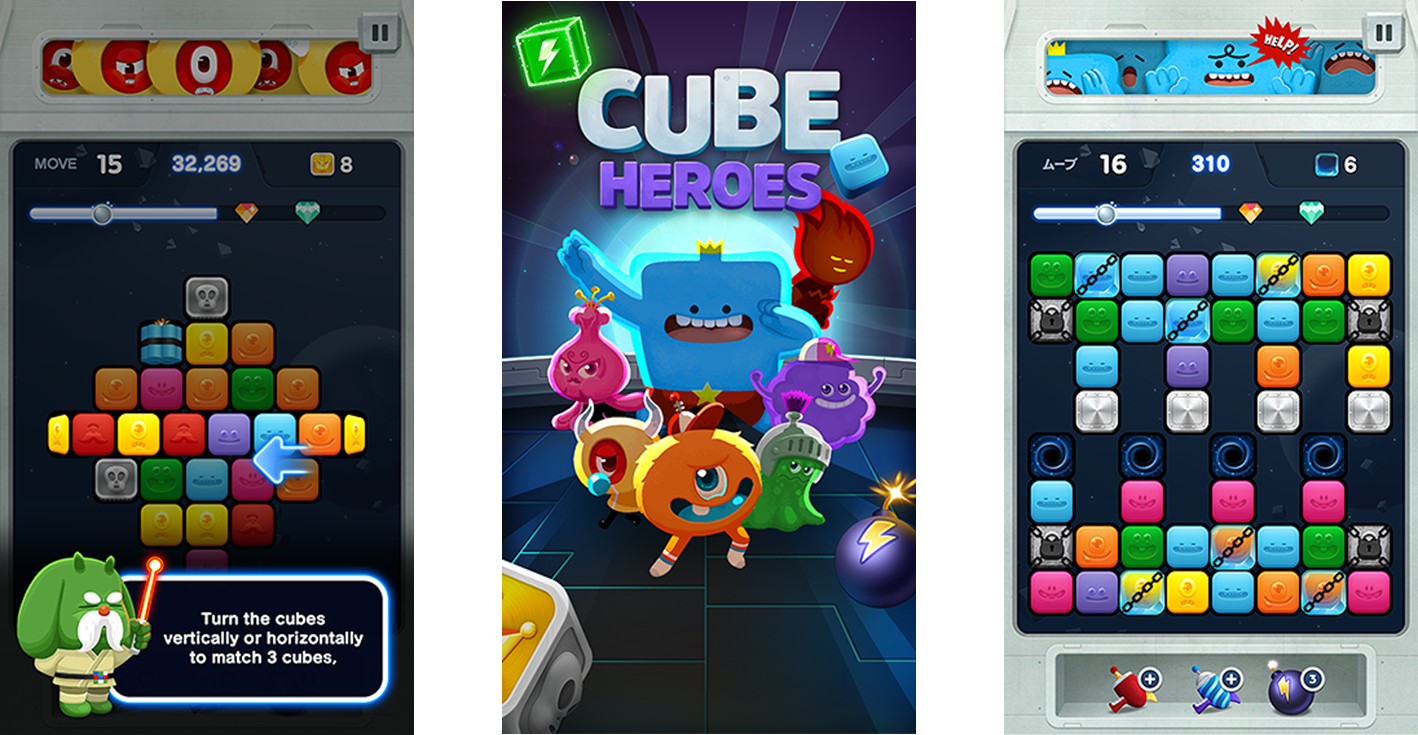 LINE Cube Heroes launches players on a quest to match cubes of the same color by spinning them backwards, forwards, and side-to-side in order to make them disappear. The cubes come in different patterns and are connected in horizontal and vertical rows that move in tandem with neighboring blocks. Users are given a bird’s eye view of the action, choosing which cubes to move based on their own puzzle-solving skills. The game challenges players to use their wits to eliminate cubes.

An alien force from a distant galaxy has decided almost on a whim to invade the world of LINE Cube Heroes. Heroes representing the seven different colors on the planet have been chosen to rescue their fallen friends. Players must battle their way through traps set by the enemy in order to progress through the game's colorful story arc.

In the game, users spin rows of cubes containing up to seven different colors to line up three or more of the same color, causing them to disappear and earning points for the player. Cube Heroes features a variety of missions that challenge players to earn certain scores within a limited number of moves, eliminate all cubes of a predetermined color, and accomplish other brain-twisting feats. Matching four or more cubes causes special cubes to appear, giving players the option of using these unique blocks to overcome obstacles and eliminate as many cubes as possible in order to earn new high scores.

Players are rewarded with experience points based on scores earned when clearing stages. As heroes level up, they start to earn bonus points and gain the ability to trigger special skills. This offers a new level of gameplay that puts players in charge of training their heroes into the ultimate fighting machines.

In addition to standard gameplay, LINE Cube Heroes also offers a versus mode that lets players pit their battle-tested heroes against other users. In versus mode, the first player to knock their opponent’s health gauge down to zero before using up all their turns is declared the winner and awarded with in-game items and other prizes.

LINE Corporation will continue to develop a variety of engaging and innovative content and services to bring customers even closer together.

All listed company and product names are trademarks or registered trademarks of their respective owners. All information is true and accurate at the time of publication, and subject to change without notice.