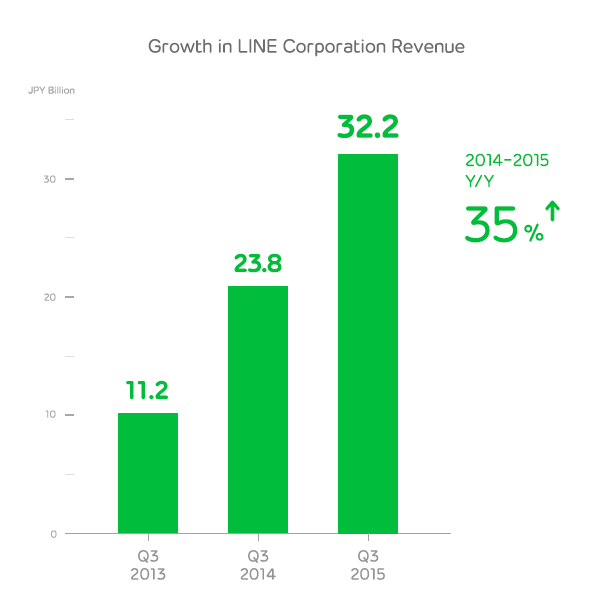 *Consolidated performance including subsidiaries such as LINE PLUS Corporation and LINE Business Partners Corporation.

The Monthly Active User (MAU) count for LINE (as of September 2015) totals 212 million, with 137 million of that total deriving from LINE’s top four countries in terms of market share (Japan, Taiwan, Thailand and Indonesia). With rapid growth in Indonesia continuing from the second quarter, LINE is focusing on Asia as it expands its global user base.

In the Sticker business, official stickers showcasing popular mascot characters and other intellectual properties are contributing to high sales, along with animated stickers and stickers featuring sound. The LINE Creators Market, a platform that allows users to sell and buy stickers created by other users, is rapidly increasing sales worldwide, most notably in Japan, Thailand and Taiwan. In Japan, physical goods based on some of the most popular Creators Market stickers have been created and sold. These goods created considerable excitement, selling out at speeds beyond expectations. In the fourth quarter and beyond, LINE will continue to develop new products and initiatives to further increase sales of official and creators market stickers.

With sales for “LINE: Disney Tsum Tsum,” “LINE Rangers” and other existing game titles remaining strong, LINE released seven new titles globally in the third quarter of 2015. “LINE: ONE PIECE Treasure Cruise,” based on the popular animated series, was released in Taiwan, Hong Kong and Macau for the first time in July. The game has performed strongly in these markets, reaching number one in the App Store in Taiwan, and will be released in even more countries and regions in the near future. LINE also established Lantu Games Limited, a new joint venture, with LongTu Korea (Headquarters: Seoul, Korea; President & CEO: Shenghui Yang), a mobile game developer that has achieved particular growth in China. Asia will serve as a foothold as Lantu Games Limited expands to other markets worldwide. In addition to these projects, LINE has many more globally-competitive titles in-development or under preparation for further localization to new markets.

In the Advertising business, LINE continues to see steady global growth in advertisers taking advantage of its official account and sponsored sticker services. In addition, LINE Free Coin Video, an incentivized video advertising service, has also been well-received, with many repeat clients and growing sales. LINE Business Connect, a business-oriented API that includes many of the features of LINE official accounts while offering a high degree of customizability for companies, has been utilized in collaboration with Intel Corporation to provide technical information support to developers and promote IoT-enabled solutions, and also with Microsoft Corporation to provide AI-operated official accounts to corporations using the jointly developed “Rinna” chatbot technology. Worldwide, LINE continues to promote various new advertising services that will further increase sales.

LINE continues to develop as a platform that provides content and services that are even more integral to modern people’s lives. The on-demand music subscription service LINE MUSIC continues to grow at a strong, consistent pace in Japan and Thailand, with more than 8.6 million downloads (as of October 21, 2015), and 4 million monthly active users (as of September 30, 2015) in Japan alone. Dedicated selfie camera app “B612” continues to grow its user base globally—most notably in Asia, Central and South America, and Eastern Europe— topping 100 million worldwide downloads on October 9, 2015 and recording 50 million monthly active users. LINE Part Time Job, a part-time job information service currently only available in Japan, has achieved 6 million registered users (as of October 2015), as LINE has begun airing TV commercials and conducting other aggressive marketing campaigns for the service. LINE has also announced that the e-comic service LINE Manga will enter into the publishing business, and is investigating the possibility of introducing the service to overseas markets. LINE is dedicated to expanding its existing services and developing promising new content and services to diversify its platform as it aims to expand its user base worldwide.

Our market share in Indonesia continued to grow steadily in the third quarter of 2015. We have thus far gained the leading share in numerous global markets through attentive, full-scale localization of our services. With a particular focus on Asia, we are now venturing into various new initiatives to find that next country or countries where we can become number one.

In the fourth quarter, we will once again accelerate the growth of our business as we aim to refine LINE as a service platform.