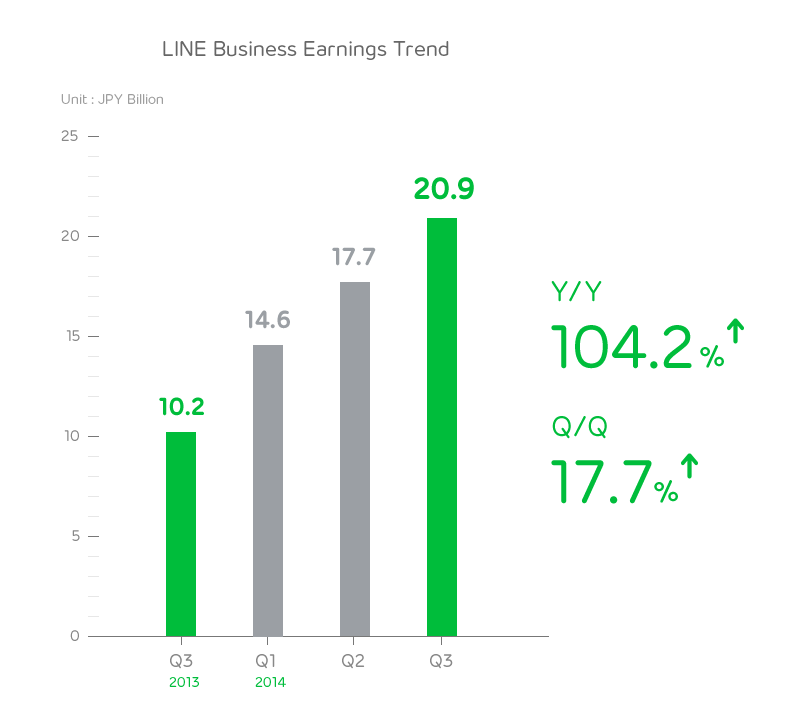 LINE now has around 170 million monthly active users (MAU), with almost 87 million coming from LINE’s top 3 countries in terms of market share (Japan, Taiwan, and Thailand). The number of registered users has continued to steadily increase not only in Asia but in the European, South American, and U.S. markets as well, and LINE now boasts 11 total countries with over 10 million users, including over 10 million in Colombia, 25 million in the U.S., and 30 million in India.

In countries where LINE boasts the top share of the market, such as Indonesia, Japan, Taiwan, and Thailand, LINE has capitalized on its high active usage rates and large user bases by utilizing a dual-pronged strategy of first taking business models that have been successful in Japan—like that of the Android only incentive-based ad service, LINE Free Coins, and the LINE@ Official Account service for owners of SMEs and small shops—and expanding them horizontally to other regions. The second component of this strategy has been to provide localized content and unique services matched to the conditions in each country, and this two-sided approach has led to the further expansion of the LINE platform. Going forward, LINE, as it announced this month at the LINE Conference, aims to expand its LINE Manga service globally, implement its own proprietary payment system, and actively promote expansion into the O2O (online to offline) sector. By engaging in partnerships and marketing tie-ups with local companies in countries in the U.S., Spain and other European nations, Mexico, and Columbia, LINE has continued to enjoy growing user numbers, and is now entering a stage of readiness to shift its user base on to the entire LINE platform in these markets.

The sticker business has continued to grow through the LINE Creators Market, a platform launched in May that allows users to purchase and sell stickers made by users themselves, and as of September 2014, more than 250,000 creators from 139 different countries have registered stickers in excess of 23,000 sets. The number of creators from overseas has continued to grow as well, allowing the Creators Market to enter a positive cycle of market growth through localized content made specifically for certain regions.

In terms of the game business, along with the continued success of LINE Rangers, LINE Get Rich, and LINE: Disney TsumTsum, LINE has engaged in active efforts to further expand in Indonesia, Japan, Taiwan, and Thailand through collaborations with local companies, events, and TV commercials and other marketing activities, leading to a growth in sales. In addition, LINE PokoPoko and LINE Stage, both released in September, have been successful in both the Japanese and Asian markets, and LINE looks forward to the continued success of both titles in the future.

The advertising business has seen growth with the increase of companies adopting the LINE Business Connect service, which allows them to utilize a LINE-based feature for sending and receiving messages via an API used with their own CRM base. Furthermore, the LINE@ service, which began in September, continues to attract more companies, leading to further growth in the Asian region.

As market conditions continue to rapidly change, the need for multi-communication apps like LINE, which lets users send stickers, images, video and other digital content to communicate with each other, shattering the boundaries of the online/offline distinction in order to act as an infrastructure more closely linked to people’s daily lives, has continued to rise, resulting in LINE’s rapid growth.

With the evolution of LINE into a global communication-centered platform, we will not only continue to operate in Asian countries where we enjoy the top share of the market, but will accelerate our international expansion in order to further grow our services and revenue base.

Please note that the above figures are based on preliminary internal financial information and not external auditors’ assessments.

＊1：Consolidated performance including subsidiaries such as LINE PLUS Corporation and LINE Business Partners Corporation.

＊2：Net sales are calculated from sales taken from contracted developers from which the 30% handling fee charged by app stores such as Google or Apple since July 2013 has been deducted. This method of calculation was and will be used in all future and previous reports.