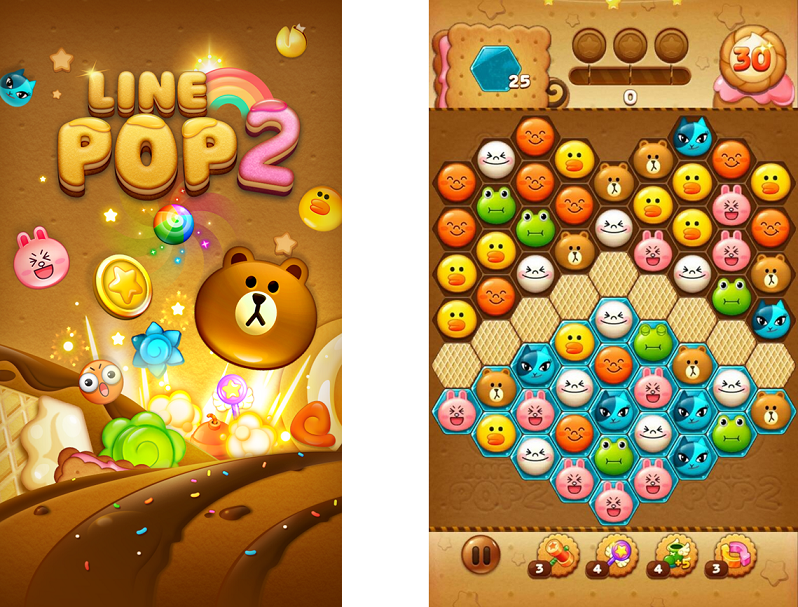 LINE POP 2 is a hexagon-based puzzle game and the successor to LINE POP, the first ever LINE GAME title released in November of 2012 which boasts a global total of more than 47 million downloads. Players can move the hexagonal blocks in six different directions, including up, down, and diagonally, and eliminate them by lining up three or more of the same character blocks. Enjoy the world of LINE POP, with its cookie motifs and hip sounds, but this time with even more challenges that require a high level of strategy. The game is sure to please a variety of users, from original LINE POP players to puzzle game masters and more.

Players advance through the game by clearing missions set for each stage, and moving blocks with the same LINE character up, down, sideways, or diagonally to line up three or more and eliminate them. In addition, special blocks created by lining up four or more of the same block now feature all new attributes, such as having the ability to eliminate blocks in X and Y patterns, on top of the standard pattern of eliminating more blocks located directly above, to the side, or diagonal to a special block. Players will be faced with the task of strategically creating these special blocks in order to clear difficult missions.

Furthermore, players can battle their LINE friends via rankings based on the number of gold, silver, and bronze medals received for scores earned on stages, as well as the number of stages cleared.

Updates are planned for release in the future, including rankings displaying all game players, hidden stages, and more.